I saw the “Half Fast” commercial by Verizon the other day. The innuendo had me in stitches. As I thought about the phrase I realized that I have encountered some “half fast” athletes in my career. What is a half fast athlete? In short, one who simply does not put the pedal to the metal. And this applies whether you’re implementing a 100 meter training plan or 400 meter training plan.

How did I figure out these athletes were half fast? I did not use a high-end timing device or any special formulas. I used 4x100m handoffs to observe their max velocity. Many complained of soreness the days that followed, so it was easy for me to determine which athletes had not been going full speed during workouts. If these athletes complaining of soreness were accelerating and hitting max velocity segments at 100 percent then doing full speed handoffs should have been painless.

During the fall I try to spice things up by using 4x100m relay handoffs coupled with acceleration segments. In the photo below you can see that the incoming runner uses a 4-point start while the outgoing runner uses a 3-point start. The athletes both react to my voice yelling, “GO.” 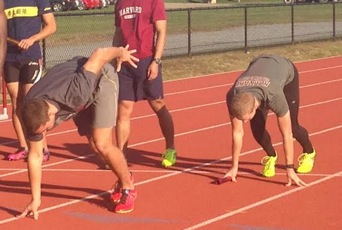 This activity also introduces other elements about running on the 4x100m relay. You can take the opportunity to teach the athletes that one runner is on the inside of the lane (turn runner) while the other runner is on the outside of the lane (straight away runner) to make sure the athletes don’t get tangled up. This is also a great opportunity to teach athletes that the runner on the inside carries the baton in the right hand and the runner on the outside takes and carries the baton in the left hand, to ensure the baton stays in the center of the lane.

COACHING RESOURCE: How to Build the Perfect 100 Meter Sprinter…From Start to Finish

This workout also allows the incoming runner to adjust to saying “go or stick” with the proper spacing. Most athletes wait too long or yell their secret code word too late. It takes time to adjust to the proper depth perception and timing to say the code word at the right moment. This activity works more than just acceleration. It adds another level of focus and execution to exchanges and max velocity.

Both the incoming runner and outgoing runner benefit from this workout. The outgoing runner has to execute proper acceleration at 100 percent effort while focusing on their teammate’s voice, so they know when to throw their hand back behind them. It is also good practice to make sure the outgoing runner knows how to properly receive the baton (i.e. making sure that the outgoing runner does not “fish” around for the baton). It is hard to hit a moving target at a high velocity.

This workout can be used all year long after proper acceleration mechanics have been taught. This activity allows you to teach sprinting mechanics while getting the necessary training effect you look for in acceleration and maximum velocity workouts. Why not kill multiple birds with one stone?

How To Improve Your 4×100 Meter Relay “Differential”