The 400-meter event is no different, in general definition, from any other sprint event.  There is an acceleration to a level of maximal race velocity which concludes with the attempt to maintain the highest possible level of that maximal race velocity for the duration of the event.  When training for any sprint event, velocities and duration of the event will dictate the specificity of the training.

The difficulty in training for the 400-meter event lies in the decisions the coach must make regarding the number of energy systems and their precursor qualities that must be addressed.  The 400-meter event must address the issues of maximum speed development with all of the additional burdens of specific endurance required to race for 43+ seconds.

The first goal of a 400-meter athlete is to be as fast as possible as measured by a 10-meter segment.  Speed development is trained from the earliest days of practice.  A basic technical model of sprint mechanics that will allow for efficient foot contacts should be mastered.  Then, the variables of stride length and stride frequency can be manipulated through “contrast training” methods.  Simultaneously, power and the ability to express that power through force application at track level will be developed.  The training menu will include acceleration development, fly-in sprints, ins and outs, multiple jumps; multiple throws, and weight room work in the form of Olympic, core and supplemental lifts. 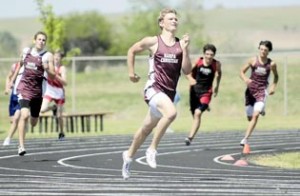 Although the five bio-motor abilities of speed, strength, endurance, coordination and mobility are always being trained, maximal speed development is the overriding theme of our general preparation phase.  Two, and sometimes three, sessions per microcycle are dedicated to this theme.  These training sessions have high neuro-muscular demands.  The remaining days of the week are spent with complimentary training themes or restoration that will allow for the greatest improvements to the maximal speed goals.

RELATED ARTICLE: Here are the *only* 3 reasons your sprinters fall apart at the end of races.

The second goal of the 400-meter athlete is to increase the lactate threshold so that less lactate is produced at any given speed and reduces hydrogen ion interference with motor unit operation.  The primary means for developing increased capacity by shifting the lactate threshold curve are Tempo runs and Speed Endurance runs.

Extensive and Intensive Tempo sessions are used throughout the season.  Tempo sessions begin at 70-75% goal pace runs in General Preparation and may increase by 5% of goal pace per mesocycle as the volumes decrease.  Traditional distances of 100-meters through 500-meters are used.  Training session paces are calculated times based on 200 or 400-meter goal pace.

Extensive tempo (XT), or sub 80% runs, may have little significance while training the 100/200-meter athlete, but it can be argued that it has value that is more significant for the 400-meter athlete.  A recovery system must be built so that 400-meter athletes can handle the increasing volumes of work necessary to develop all five bio-motor abilities adequately throughout sessions, microcycles, mesocycles, macrocycles, and careers.  Extensive Tempo is a logical precursor to Intensive Tempo (IT), or 80-90% runs.  More importantly, Extensive Tempo aids in recovery from previous days workouts, enhances muscle capillaries, increases or maintains work capacity, provides low intensity opportunities to develop healthy joints, and strengthen soft tissue.

Intensive tempo mixes aerobic and anaerobic energy systems and allows for the shift of the lactate threshold curve. Some 400-meter training protocols focus on Intensive Tempo.  Intensive Tempo is the precursor to higher intensity Special Endurance runs. Both extensive and intensive tempo runs closely mimic the duration of the 400-meter event at sub maximal velocities.  Tempo runs may occur once or twice per microcycle in General Preparation and Specific Preparation. You should use them less frequently in other phases of training.

Tempo runs are also a way to teach the lessons of race distribution, pace, and general relaxation cues to the long sprinter.  Tempo sessions are calculated using percentages of goal pace and are expressed to the athletes in terms of pace per 100-meters. The athlete should steadily increase effort throughout each run as well as throughout each workout so that the pace is maintained.  Running too fast too early in any run or during any training session is to be avoided so that the total product of the run or session is not compromised.

SPEED or ENDURANCE? Discover the Truth About How to Plan Effective Training for Your Primary Event 400/800 Runners

A variety of speed endurance runs including Glycolytic Short Speed Endurance (GSSE), Speed Endurance (SE) and Special Endurance 1(SE1), will challenge the anaerobic glycolytic system at velocities that more closely mimic the demands of the 400-meter event over shorter durations.  These sessions are used during the Specific Preparation, Pre Competition and Competition phases of training.

The third goal of the 400-meter athlete is to alter neural thresholds to operate more normally in the presence of hydrogen ions.  Hydrogen ion accumulation slows down the rate of glycolysis as well as contractile activity within the muscles and limits both the force and duration of muscle contractions. Special Endurance 2 (SE2) runs are prescribed during the pre competition phase to increase the tolerance of hydrogen ions associated with lactate production.  This tolerance is also referred to as buffering.  An 8-week prescription of Special Endurance 2 will increase buffering ability.  One session per microcycle will be prescribed.  The likelihood exists that another session will occur in the form of a 400-meter competition and/or a 4 x 400-meter relay leg.

During these SE2 workouts, the athletes will be asked to perform while “swimming” in lactate and hydrogen ion.  These workouts are incredibly demanding both physically and psychologically.  This is the feature workout of the microcycle and all other training should be designed around having the athlete prepared to give a great effort on the day of the training session and allowing the athlete to adequately recover before being asked to perform again at a very high intensity.

The fourth goal of the 400-meter athlete is to take full advantage of their training by running an intelligent and sound race plan that will allow for the fastest possible result.  It is my opinion that the majority of 400-meter athletes run too fast too early in the race.  Athletes run the first 200-meters too close to their 200-meter PR, which accelerates hydrogen ion accumulation.  The race model asks an athlete to run 1.5 seconds slower than 200-meter PR for the first half of the race.  In doing so, they arrive at the 200-meter mark comfortable enough not only to be able to race over the second half of the event, but also fast enough to enable a good final time.  The race model then asks the athlete to have a 1.0 second differential between the first 200 and last 200.  Executing this race model takes tremendous discipline over the first half of the race and tremendous confidence over the last half of the race.  During the first 200-meters the athlete must not worry about what is happening in the lane outside or inside of him or her.  The athlete needs to be able to increase intensity over the second half of the event and be able to race to the finish line over the last 50-meters.

Training for the 400-meter event is like cooking a good stew; there are literally hundreds of different recipes available.  Most of the recipes contain similar ingredients, but it is how much of each ingredient, and when they are added, that will ultimately dictate the stew’s flavor.  The dosage and order of training ingredients for the 400-meter event will ultimately dictate the success for the athlete.

Ron Grigg - Ron Grigg continues to raise the level of the Dolphins’ success as he enters his 18th season at the helm at Jacksonville University. Grigg has made the Dolphins track program a beacon in the ASUN Conference by winning the ASUN Indoor and Outdoor Championships in each of the last 11 seasons – earning “Coach of the Year” in all 22 of those titles, as well as earning the United States Track and Field and Cross Country Coaches Association South Region Women’s “Coach of the Year” in 2008. Grigg began his coaching career at Carver High School in Baltimore, Md., in 1994 as the head cross country and track and field coach for one year before assuming an assistant coach position at Coppin State College in 1995. Grigg earned a Bachelor of Science in political science from Massachusetts-Dartmouth in 1993. Grigg holds USATF Level II coaching certifications in sprints, hurdles, jumps, throws and multi-events, and has instructed both USATF and USTFCCCA Coaching Certification courses with regularity.
Related Posts


Intensity – Can It Be Too Much In Middle Distance Training?