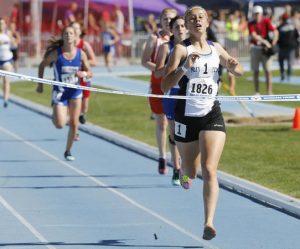 The 800 meter run is considered the shortest endurance race in track and field.  While it is twice the length of the 400 meter dash it retains some of the physiological and psychological characteristics of that event.  Here we will consider the 800 meter runner.

In profiling the 800 meters the importance of speed, speed endurance, strength, and stamina cannot be understated.  It is the only race in track and field where the first half of the race is typically faster than the second half if done properly.

Yet, on most high school track teams the event is usually filled by distance runners exclusively.  Distance runners may find the 800 meters to be a challenging and exciting event, but usually lack enough speed and speed endurance necessary for success.

While it is not easy to talk 400 meter runners into stepping up into the 800 meters they may already posses the maximum speed and speed endurance necessary for a good base in getting an advanced start in the event.  If they have some early success they may generate the desire to develop the sub-maximal stamina needed to really be successful in the 800 meters.

They are trained much differently because they have different athlete profiles and their daily sessions on the track should reflect that.

The Type 2 800 meter runner probably already has a well developed VO2 max system which is indicative of a powerful aerobic energy system.  Their problem is they usually lack max speed, which along with speed endurance must be a major focus of their training.  The workload should show lots of training sessions of repeats at 150 meters or less with a great deal of recovery between each repeat.

The Type 1 800 meter runner probably already has pretty good maximum speed and speed endurance.  These components will need regular training stimuli to stay high, but the real training focus should be on developing sub-maximal stamina in order to not let the second lap of the 800 meter race drop more than 4% of the first lap time.

Developing stamina in Type 1 800 meter runners is not like developing stamina in 3200 meter and 5K runners.  They should not be trained together for the most part.  These people are not going to jump in and run long distances, do lengthy lactate threshold runs, nor do many (or any) repeats of miles at vVO2 max pace.  Yet, this is the work necessary to develop the proper stamina.

Almost all of the work done in a season by a Type 1 800 meter runner is done interval style.  This includes both aerobic and anaerobic work as well as max speed sessions.  Recall that the term interval refers to the rest interval between bouts of work.

There is no set time for a rest interval as it is pace dependent.  It is important to just note that the interval should be long enough to supple a “worthwhile break” so that the runner can get back to work at a stressful level.

The interval may be as long as 10-12 minutes for some specific high end anaerobic sessions and as short as 15-20 seconds in aerobic intervals.

A Type 1 800 meter runner needs a weekly long run of at least 50 minutes which would correlate with their volume of about 35 miles each week.  Most cannot do 50 minutes nonstop.  Make it an aerobic interval session with the athlete stopping for 20-30 seconds after each ten minutes of running done at somewhere near aerobic threshold pace.

It is important that the coach controls the recovery period, if it is not enough and it may not be early in the season, extend it.

These runners also need a weekly tempo run but could never run 25 minutes continuously on the roads at lactate threshold pace.  Again, make it an interval session on the track.  Have them run 16 x 400 meters at their lactate threshold (LT) pace with 15 second of controlled recovery after each lap.

They will also need to develop their VO2 max which is an aerobic component essential to 800 meter success for any type of runner.  Recall their maximum mile time from a recent test at practice.  This is the pace for vVO2 max workouts for a Type 1 800 meter runner.

A good VO2 max work session would be 7 x 800 meters at that pace.  Let’s say they ran 5:00 for the mile test.  The workout would be seven 800 meter repeats at 2:30 with 2:30 recovery between each bout of work.  The goal is to not tail off over the last couple, extend the recovery to 3:00 if necessary.  Do something like this once per week as well.

A thoughtful head track coach should take a long look at their sprint roster and move a few of those second tier 400 meter runners up to the 800 meters and train them as outlined.  Who knows, after a year or two they may love endurance enough to join the cross country team in the fall?

And by the way, do not listen to the nonsense that high school 400 meter runners should not run cross country because it would “ruin their speed”.  Purely anecdotal, no science behind it.