I always enjoy picking the brains of my colleagues and other aspiring coaches.  Luckily I work with some fantastic coaches in the sport, like our middle distance coach Tim Bayley.  He was an All American in the 800m at Iona College with a personal best of 1:46. Tim’s middle distance crew had an amazing indoor season in 2013. I was impressed with their range to move up and down from the 800m, sometimes down to the 4x400m relay.  Especially his ladies, who broke school records in the 500m and 1,000m this winter, one of his athletes even improved from 2:11 last indoor season to 2:05 this year.

Many times middle distance coaches have asked me questions about altering training for their runners so they can succeed in the shorter races and relays.  Tim certainly did a great job training his middle distance group for the 800m as well as the 600m, 500m, 400m and 4x400m relay.

Below is a transcript of a brief conversation I had with Tim right after his top 800m female athlete competed in the 2013 NCAA Indoor Championship.

1) What do you attest to your athlete’s ability to drop down in race distances? 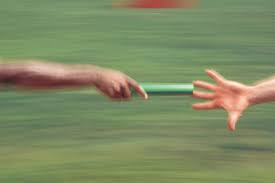 One of the biggest things that has helped the MD crew to drop down in distance is the natural speed that they possess and the work that we performed to develop it throughout the Fall. The mind-set of many of the athletes is that they want to be able to run good 4x400m relay legs and are excited at that prospect, whilst believing that they can contribute on the relay. Many of these athletes competed regularly on the 4x400m relay on their respective HS teams so thrive off the opportunity to run the relay. A big factor that helped to prepare them for running the shorter distance was the implementation of speed development throughout the fall.

2) What did you implement into their training to prepare them to race at higher speeds over a shorter distance without taking away from their primary event?

A) What type of workouts do you implement to get some serious turn over with your middle distance runners?

B) When do you start this process?

One of the big areas that has helped the MD runners to drop down and run the 500m and the 4x400m relay has been the implementation of speed development training throughout the fall. Through the months of August to December we focus on aerobic development and structural conditioning but ensure that we perform speed work to constantly develop and refine running technique and mechanics. During the calendar week, speed development was performed every Monday like clockwork right from the start of the semester. A sample speed development workout that we performed was a progressive, multi-planar warm-up lasting approximately 50min in total including a variety of sprint drills. This was followed by 3x150m broken into 50m segments cruising the first 50m, ‘hitting’ the middle 50m at around 90% max velocity and cruising the last 50m into the finish. All 150m reps were followed by a 3-minute recovery. We then completed 6x60m sprints from 2-point start at 97% max velocity working on perfect mechanics and relaxation at speed. These reps were (painstakingly!) followed by a 3-minute recovery to fully recover and allow for quality effort.

Workouts of this nature on a weekly basis throughout the fall definitely helped with the ability to drop down in distance and run competitively over the shorter distances whilst not compromising the aerobic component of training that I feel is crucial to success over the 800m.

3) What mistakes do you feel coaches may make when trying to prepare 800m runners for the 4x400m relay?

One mistake that I feel can easily occur in the training of 800m runners is to neglect speed work during the fall base phase of training. With the emphasis on developing the facets of the athletes aerobic profile at that time of year the speed is easy to overlook. This can lead to athletes having a tough time on 4x4oom relay legs early in the indoor season as they struggle to bring out their speed. I also feel that a lack of speed development in the Fall can leave the door open to injuries during the transition phase from base training into indoor competition and this could also result in a coach holding his/her athletes away from relay legs early on for fear of injury.

Our women’s 4x400m relay has a shot at qualifying for the NCAA Championships this spring.  One of your athletes in particular will be a big factor in this equation.

1) What will you add to her daily/weekly routine to make sure she is ready to throw down in the 4x400m relay?

To be honest I wont change anything with the plan and approach that I have been using to train her for the relay. She is very talented and possesses great speed, which we continued to develop during the fall using the weekly speed development training. As the season has progressed, her speed has continued to improve, as have her relay legs. One aspect of her training that I have held back on a lot during the indoor season is speed endurance work. We only performed one speed endurance workout this calendar year to date and this is an area that we will hone in on for training in the upcoming weeks as we progress into the outdoor season. This has always been in the plan and I am confident that it will have a big impact on both her 800m and 4×4 ability. Our 4x400m relay is in a great spot going into the outdoor season and coach Tolbert’s 400m athletes have been in tremendous form and, like our 800m runners, will only get better as the season progresses which is a very exciting prospect.