There are several critical aspects to aerobic fitness in all endurance sports, including cross country running in particular. For instance, aerobic capacity is an important factor, and is defined as the maximal oxygen intake in liters per minute for an athlete. It is a true measure of individual work intensity, and its measured value is best suited for endurance activities of the non-weight bearing variety. Aerobic capacity is tested often while training road cyclists, swimmers, and rowers in order to assess cardiovascular fitness and to evaluate the training scheme.

The individual’s aerobic capacity defines the size of the engine in a human being, much as in an automobile. For example, a 4-liter mechanical engine is more powerful than a 3-liter engine, with all else being equal. But things are seldom equal and other factors such as vehicle weight, influence performance. In automobiles, the larger engines are usually found on heavier cars and the same is true in human beings.

Physiologists have concluded that aerobic capacity is most strongly correlated to performance in events lasting 12-25 minutes, in sports in which the weight of the body is supported by water or equipment, such as swimming, rowing, and cycling. Cross country running is not included on this list because of the effects of gravity that must overcome by the athlete.

Related: The Oxygen Deficit Curve: The Limiter of Mid-Distance Performance

Aerobic power is a much better indicator of cardiovascular fitness and development in the weight bearing endurance sports such as cross country running and Nordic skiing.

Aerobic power indicates the oxygen intake per unit of body weight and is directly correlated to performance in activities lasting 5-15 minutes. Physiologists have also found it to be an excellent measure of endurance fitness in sports such as basketball and soccer. 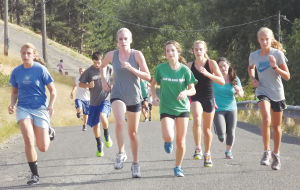 Physical activity ranging from repeated exercise periods of a few seconds’ duration up to hours of continuous running/jogging/walking may place a major load on the oxygen-transporting organs and thereby can induce a training effect, provided the exercise load is sufficiently high.

Studies have shown that repeated exercise with large muscle groups of the leg for 3-5 minutes, followed by rest or light physical activity for an equal amount of time, then a further exercise period, is the most effective way of advancing the development of aerobic power in a runner.

The load need not be exhaustive during the exercise period, because VO2 max uptake can be reached without an all-out effort. Mild exercise such as light jogging between the repeated heavier workloads of the session is advantageous, because this activity eliminates lactic acid metabolites faster than complete rest.

It has been shown experimentally that the cardiac output (Q) and blood pressure reach their highest values at a load that produces the maximal oxygen uptake. During supra-maximal exercise (faster than VO2 max pace), oxygen uptake, cardiac output, and stroke volume attain lower values than they do at the slower VO2 max pace.

Because physiologists have targeted the exhaustive exercise duration of 5-15 minutes as prime territory for aerobic power measurement, it makes sense that the field test for coaches would be something at or near two miles to exhaustion as the test for VO2 max pace for any individual.

Once that date value is established, a session workload can be prescribed that exceeds two miles in total length if broken up into interval-style sessions lasting 3-5 minutes of work, at that individual date pace. Work time always equals rest time in these types of sessions. The total volume of the session should be from 4800-8000 meters at VO2 max pace.

The greatest gains in maximal aerobic power occur when the training intensity is at levels requiring 90-102% of VO2 max, with the range 98-102% being optimal, according to Dr. Vigil. The minimum training stimulus required to achieve any significant improvement in aerobic power appears to be tasks requiring 60% of current state fitness VO2 max.