Aerobic power is considered a good measure of aerobic fitness. Commonly known as VO2 max, it is useful for the running coach to determine what velocity is associated with present day aerobic power development in an athlete at that moment in time. Once the vVO2 max is determined it can be used to structure aerobic training loads and intensities.

The use of oxygen during aerobic metabolism rarely reaches a maximum in the average person. A human has to get within 88-90% of maximum heart rate to reach maximum oxygen use, however distance runners frequently reach such a threshold.

Aerobic power (check out Coach Christensen’s prior article: Aerobic Power Primer) and its correlated velocity can be determined during a treadmill test in the physiology lab. However, a field test over an exhaustive two mile run can be used to determine velocity at VO2 max which is the most important value for the coach, (vVO2 max). The lab value will determine milliliters of oxygen metabolized by each kilogram of body tissue per minute at maximum effort at about two mile pace.

It has been shown that the VO2 max value is influenced by three variables: the genome of the individual, the maturity of the individual, and the aerobic fitness of the individual. An average untrained adult has a maximum value of about 35ml/kg/min of oxygen consumption. This value is rather low in comparison to other animals and reflects the non-migratory, walking lifestyle of humans (table 1). It has been shown that aerobic power is highly trainable in distance runners if given the proper work stimulus. Several studies have shown a 20% improvement in VO2 max over 25 weeks of training. Improvement in aerobic power must come from one, or a combination of the variables, in the VO2 max mathematical equation known as the Fick equation.

Through specific training, VO2 max can increase because of central development, which is concentrated in structural changes to the heart. While HR improves little through any sort of training, SV can improve dramatically.

Aerobic training has been shown to increase the size of the heart, especially the left-side ventricle. The more oxygenated blood that leaves the heart towards the working muscles while running, the greater the improvement in running performance at sub-maximal speed. The training concern is the vast amount of time needed to increase the volume of the heart.

The VO2 max equation (Fick) is also is influenced by the amount of oxygen extraction at the muscle. The equation indicates that VO2 max increases if more oxygen can be delivered by the heart and blood, and extracted by the muscle cells.

The extraction variable can also be increased through specific training. Increases shown in VO2 max are thus influenced by peripheral development as well as central development. 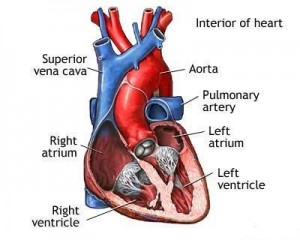 Peripheral factors are concentrated at the muscle-circulatory interface. It is both structural and bio-chemical in nature. Structurally, it involves synthesizing a greater capillarization network of beds touching the muscle. Some studies have shown an increase from two capillaries along a single muscle fiber in untrained humans to as many as seven capillaries along each muscle fiber after 27 weeks of specific training.

General aerobic fitness and specific aerobic power both improve as VO2 max increases through training. Running velocity increases at a higher VO2 max value because the body is able to utilize a greater amount of oxygen. It is simple algebra, but the training is far from simple.

Training should always follow the direction that the greatest amount of development is desired in the least amount of time. VO2 max training involves applying stimuli to both the central and peripheral areas of the system.

Peripheral development is a different story. Studies have shown that peripheral development (at the muscle) is best accomplished with training velocities right at present day vVO2 max or about two mile pace velocity (v). Workouts that come to mind are mainly interval style runs at individual vVO2 max with a work to recovery ratio of 1:1. Mile repeats, 1000 meter repeats, or 800 meter repeats can all be done if monitored closely for pace and rest. The selected interval-style training distance chosen should be done once per week for a total volume of about 6400 meters for the day.

Developing VO2 max is crucial in making distance runners faster. It is important to understand that both central and peripheral factors must be improved to fully be effective training.

Workouts stressing VO2 max must be highly individualized, closely monitored, and complex. They are well worth the time and effort in fully developing aerobic power in distance runners.

Five Basic Workout Themes the Cross Country Coach Should Use