Training science, like all science, is about replication of procedure to attain the same data sets. Yet each runner is a unique person. Track coaches use sciences of physiology and psychology to develop successful athletes in hopes of replicating data from person to person and season to season. This can be difficult in part because coaches usually work with large groups of athletes in their training group. The application of unique training and psychological stimuli within the training group is called individualization of training. To do this effectively is critical for success.

The athlete profile is a tool that coaches can use to shape a macrocycle of training and development in a middle distance runner. Basically it is a well researched history of past occurrences in an athlete that is then used shape the direction of future training. All aspects of the athlete must be documented and considered.

This is Part 3 of the actual Athlete Profile of high school runner and American 1600 freshman record holder Eli Krahn. In Part 1, (see: The Athlete Profile – Part 1), the first three considerations were described. Part 2, (see: The Athlete Profile – Part 2), went on to describe topics 4 and 5 and were made part of the profile. Part 3 completes the project with topics 6, 7, and 8. By combining all eight topical considerations into one extensive athlete profile, the coach now has a plan of action for a particular macrocycle.

The main performance goal for Eli Krahn in 2014 is to qualify for the USATF Junior Meet and race for a position on the USA Junior World Championship team. Additionally, his own personal racing goals are to defend his Minnesota state 1600-meter title and add the 3200m state title to his vitae.

Max Lipset, the strength coach for Eli, has projected a 40% improvement in general body strength over the 30 weeks of training leading up to the Junior Meet. Strength building activities added to the training program will include the dead lift, back squat, front squat, and an assortment of glute and abdominal core activities. Emphasis will be on power and endurance, and not isolated on maximum strength improvement. The front squat will be added only after the other two lifts have shown improvement. Eli will be with his strength coach five days per week following his running workout.

The 2014 development of a more robust aerobic system in Eli will be centered on the following additions and changes to his running program:

A plan and projection of improvement was formulated and was discussed with Eli in December 2013 (Table 4).

Using the December actual 3200-meter test performance, and projected monthly 3200-meter values as the vVO2 max markers, a profiling chart was developed to prescribe training intensities for anaerobic, aerobic power, and aerobic capacity training sessions (Table 5.). The intensity, frequency, volume, extent, and sequencing of each of these sessions will be determined at the microcycle level. 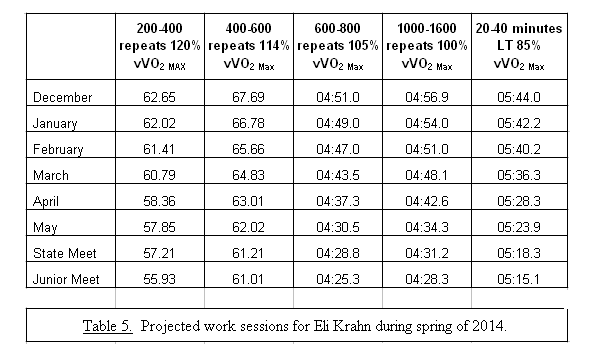 Twelve-day microcycles were set up to administer, sequence, and organize the training sessions during each training period and training phase. The twelve sessions in each microcycle during specific preparation and pre-competition contained four anaerobic sessions with each session designed to keep the lactate in the blood yo-yoing between 6-17 mmol between prescribed recovery through work duration.

There will be a race and three recovery runs, plus two new pool sessions during each microcycle.

New strength-endurance work will be set up on a ¾ mile long hill of 3% grade. The session is four repeats with a seven minute jog recovery. The long run is 10 miles (@HR 152 bpm). In addition a 40 minute lactate capacity run (@HR169bpm) will be added into each microcycle. Aerobic power interval session volume will increase by 25% which is still in the acceptable range (Vigil 1995).

Additional aerobic sessions, more intense aerobic sessions, added strength-endurance sessions, and new pool running sessions were completed in the training program of Eli Krahn during the spring of 2014. He did contact an URTI which affected about eight days of training in the middle portion of the macrocycle. The weather in Minnesota was not favorable during this macrocycle and it had some negative training effects as far as lost or inferior work.

Eli successfully defended his Minnesota 1600-meter title and added the 3200-meter title in times that were not significantly different from last year. He qualified for USATF Junior Nationals, but his professional team decided to not run him. Eli is 16 years old and will have three more opportunities to compete in that meet.

Despite the virtually identical marks to 2013 in the 1600 and 3200 meter races at the state meet, his measurable aerobic training work beyond 3200-meters in 2014 was superior to 2013 as shown in Table 6. He has now built a robust aerobic base that will pay dividends in future high school macrocycles.

The general body strength of Eli improved dramatically during 2014 without an additional pound of added body weight. At the end of the 2014 spring macrocycle he had improved his dead lift sessions from repeated work at 85 pounds to repeated work at 175 pounds. His front squat had improved from work at 65 pounds to multiple sets at 145 pounds. He has improved his chin-ups from a total of three to start with, to now doing three sets of five repetitions.

Eli Krahn remains a curiosity. His further development should invoke the same curiosity as when he burst onto the scene at age 15.   The future holds no promises, for the only thing we truly know is what the scientific method provides us with.