Here are 3 rules/facts about building a championship culture in real life and not just our minds. (If there is a difference, which is debatable, but a topic for another time.)

3. Know What You’re Talking About

Multiple studies show we all tend to overestimate our abilities. If you surveyed 100 high school coaches, 99 would claim they know what they’re doing.

I’ll be the first to admit I’m far better at Jedi Mind Tricks than I am at understanding muscle physiology. But, I’m confident I could pass a test on both.

Kids know if you know what you’re doing, especially in 2014 where there’s this thing called the Internet.

The lack of coaching standards, continuing education and professionalism in high school track and field (and youth sports in general) is staggering.

If you want to be a substitute teacher and hand out worksheets, you have to pass a background check that takes 4 months to come back. If you want to be in charge of a HS track and field team you just have to be able to get out of bed in the morning.

Some coaches believe their qualifications to coach are directly proportional to the length of time served. Or how good they were at that sport.

(As I’ve said before, give a monkey a stopwatch and 20 seasons and it will win some championships. It’s called the Law of Probability.)

You don’t build a Championship Program or culture by having a lot of pizza parties and singing Kumbaya before practice every day. And as good as you may be at being positive all the time, you’ll never beat coaches and teams who actually get certified by USATF or USTFCCCA and/or go to coaching conferences and clinics and/or buy coaching education materials.

Staying the same is falling behind. Kids can smell coaching incompetence a mile away. I get their emails. I get their parents’ emails.

You don’t win championships with regularity by ‘luck’. The only people who believe that are, well, monkeys with stopwatches.

In quality programs, athletes will take on the personality of the coach.

Or they’ll just tolerate the coach because they have no other option. Like in my previous point, no coaches think they’re only being tolerated. I’ve worked with some and the only people they were fooling were themselves.

Ignorance is bliss, I suppose.

But, if you want to build a Championship Culture where achieving Excellence is the expectation and not the random outcome of a probability equation, you have to vibrate at that frequency on and off the track.

Coaches shouldn’t preach about confidence when they can’t look people in the eye or confront people they take issue with. Don’t talk about it, be about it.

Coaches shouldn’t preach about commitment and dedication when they make up practice on the drive in to the facility or on the way out to the track. Don’t talk about it, be about it.

Coaches shouldn’t preach about excellence when they don’t actively invest in their own coaching knowledge and education. Don’t talk about it, be about it.

There are few types of people worse than hypocrites. And your athletes know the difference.

1. Everybody Hates a Winner

If you’re going to develop a Championship Program and Culture, people are going to run their mouths about you.

You lie. You cheat. You recruit. You steal athletes. You’re overrated. You just get lucky. You hate Christmas. You caused climate change. You caused Malaysian Airlines Flight 370 to disappear.

I’ve been posting my opinions online for 10 full years now and some of the stuff people say (always on the Internet and never directly to my face) is truly hilarious.

If you don’t have people talking trash about you, you’re not working hard enough.

And you need to scrap up on some new haters by the end of the week.

Most people don’t want you to be successful because they believe there is only so much to go around. If you, your athletes and/or your program take up 95% of the available Awesome, what’s left for them? 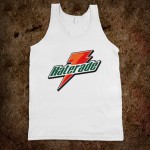 You forgot your uniform.

As coaches, we often speak of athletes who fail to perform or develop because of ‘fear of failure’ or ‘fear of success’.

Why would coaches be any different?

If you want to develop a Championship Culture, prepare for people to run their mouths about you (behind your back). Nobody talks about the team or athlete that finishes in last place.

Or second place for that matter.

So reframe trash talking as the highest of compliments.