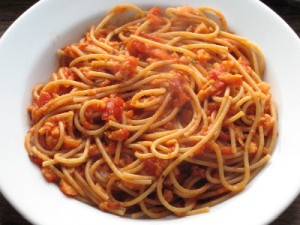 Understanding and following proper nutritional protocol is crucial to the success of any athlete.  Human cells require nutrients ingested from outside of the body to provide an energy platform for muscle contractions, amino acids for synthesizing a wide variety of protein-based components, and micro-nutrients that provide a sort of co-enzyme function in many cellular functions. Carbohydrates are very important.

Eating is a very personal human activity.  The role of the high school cross country coach is to provide the athlete with a basic understanding of scientific principles regarding nutrition, not to plan and dictate every meal and snack for the team members.  Perhaps the most important concept to be taught is the role of carbohydrates in a cross country runner’s diet.  Armed with that information a runner can make sensible choices about diet selection and gain an understanding about the timing of carbohydrate ingestion before their races.

Think of carbohydrates as the body’s jet fuel supply.  Carbohydrates are the preferred energy-rich molecules for striated muscle contraction and the only fuel source the brain can operate with.  For that reason, storage of carbohydrate is essential in the body.  Carbohydrate is stored in the three separate ways: Muscle and liver glycogen and blood glucose.  Consuming adequate carbohydrate on a daily basis is necessary to replenish both types of glycogen between daily training sessions and competitive events.

Stored muscle glycogen dwarfs the glycogen amount stored in the liver, but both sources are important in the training regime of the cross country runner.  For example, a 12 mile long run for a runner (training at 60 miles per week) will come close to exhausting both supplies of glycogen if done too fast.  Glucose saturated in the blood only contains enough energy to run one mile, so it needs to be restocked by glycogen stores continuously while running longer distance.

The energy demands of running dictate that carbohydrate is the preferred fuel for exercise intensities above the aerobic threshold.  Lipid oxidation cannot supply ATP fast enough to support such high-intensity running, although it contributes a fraction of the amount needed.  Lipids supply more calories per gram of substrate than carbohydrate, 9 KCAL/gram compared to 4 KCAL/gram but the process of oxidation of lipids is much slower.

There is a statistically significant correlation between the pre-exercise muscle glycogen stores and the length of time running can be performed at 75% of VO2 max.  The more embedded the quantity of muscle glycogen, then the further one can run.

It should be emphasized to your athletes that the total amount of carbohydrate consumed is the most important consideration for replenishing glycogen stores following daily training sessions and competitive events like time-trials and races.  In the current era of diet books that run the range of recommended carbohydrate intake it should also be emphasized that any runner on a low-carbohydrate diet is asking for chronic exhaustion and decreased performance.


Two Peaking Workouts You Must Do with Your Cross Country Athletes