I have received a lot of great feedback and questions about sprint workouts and the Master Class on the 100m. One question that came up a few times pertained to “runs” early on in the season.  I was confused at first by these questions because sprinters go on runs every day.  As a matter of fact, my athletes ask me every day, “What are we doing today?” My stock answer for that question is usually, “I think we will try running today.” Questions about general runs, fitness runs, cardio runs, distance runs or whatever you want to call them keep coming up.

In general, with sprint workouts, I do not send any sprinters on “runs” once the training starts. If I ask a sprinter to run 3 miles they will either take 30-40 minutes (which is a waste of time) or they will run for 10 minutes then play basketball for 20 minutes and return to the track.  Sure, over the summer my athletes may go on a run once a week for up to 30 minutes.  I only do this because a lot of the athletes do not have access to the facilities or the equipment to get things done over the summer.  I have a choice, I either don’t have them do their sprint workout or have them do something simple. Sending them on a 30 minute run is the lesser of two evils.

Once the athletes get back to campus we have access to all kinds of practice space and equipment.  Therefore, we do not need to go on “runs” anymore.  At this time we can get creative. This is the fun part of being a coach.  We get to use our minds to create something exciting to do rather than a general run.  Sending the athletes out on a run is an easy way out for the coach and a boring experience for the sprinters. That sounds like a double negative. In track two negatives do not equal a positive.

How to build the perfect 100 meter sprinter…from start to finish.

Just the other day I was trying to figure out a way to find out which athletes pushed themselves to stay fit over the summer and which athletes had a really fun summer in the sun.  I did not want to do a timed mile to figure out who was fit.  Instead, I made up a sprint workout that I called the “Circle of Truth”.  Below is a description of the workout we did after an active warm up and sprint drills. 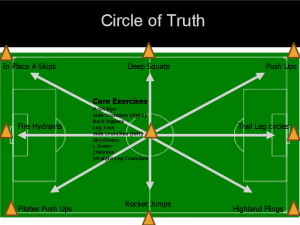 The Truth Will Set You Free!

There is a cone in the middle of the field with a piece of paper that has 9 core exercises listed on it.  There are also eight cones spread around the out skirts of the field with some sort of body weight exercise or activity written on it.  The athletes do the first core exercise (you determine the number based on your athletes age and fitness level) then they run to a cone on the side line. The athletes do the set number of repetitions for that exercise then run back to the center.  When the athletes reach the center they will do the next core exercise listed on the paper then run to the next cone.  I asked the athletes to move in a clock-wise direction when choosing a cone on the out skirts to keep things going smoothly.  The athletes are simply doing a core exercise, sprinting to a cone, doing a body weight exercise, sprinting back to the center cone, and so on.

RELATED: Here’s an inventory 400 drills and 40 pre-made circuits for simplifying your workout planning.

I asked the sprinters to do the first set with a jog to each cone. This way the athlete would completely understand the sprint workout.  Then in the next set I asked the athletes to sprint to each cone. I let them know that I am timing this workout.  The name of this sprint workout stems from the fact that we are going to find out who is the fittest and who is the least fit.  Hence the name “Circle of Truth”. I know we did this on a football/soccer field (rectangle), but I thought circle just sounded better since we were moving around the field in a clock-wise direction. When we were finished we did a final set with no running. All of the core and body weight circuits were done in the center of the field.  The athletes were exhausted. It was GREAT!

The next time I use this sprint workout I will amp it up a little more by starting off with a sprinter’s jog(bouncy, not flat) to each cone during the first set, a technical stride to each cone in the second set, and sprint to each cone in the third set.  They should be able to handle this in a few weeks because in theory they should be in better shape. If the three sets are not enough, we can add a fourth set of core and body weight exercises in the center of the field.

I really thought this workout went well.  We accomplished a lot in a short amount of time. After we completed an active warm up and sprint drills the athletes got in a great cardiovascular workout that is way more productive than slogging 3-5 miles, doing so on a soft surface (saves the back, knees, and shins), did a bunch of core exercises (good for posture) and body weight exercises (great for building strength), and technique while running to each cone.  And…we found out the truth about each athlete’s fitness level.