How does the fastest woman on earth do cleans?

Cleans have been in the programs of track and field athletes for decades. Throwers, sprinters, and jumpers can all benefit from training in the weight room with cleans and snatches due to the high threshold motor unit recruitment that is unique to lifting with the Olympic style lifts.

Heck, even the world’s fastest woman is doing cleans in this youtube video.

She asked for viewers to not critique her at about :30 into the video, but with all apologies to Carmelita, I am going to critique her.

Uh-Oh. Carmelita makes a vertical pull on the bar from the floor allows the bar to stay away from her body. The bar should be moving in at this point to bring it closer to her center of mass.  Closing the distance to an athlete’s center of mass is the goal of the entire first pull (the slow pull from the ground to the knee) 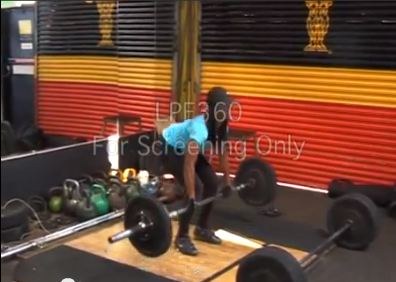 Once the bar passes her knees it stays away from her body and her knees do not re-bend to create the most vertical power.  She ends up pulling from this position (it’s not good). She should still try to squeeze the bar in, and move her knees to create a vertical power spike. 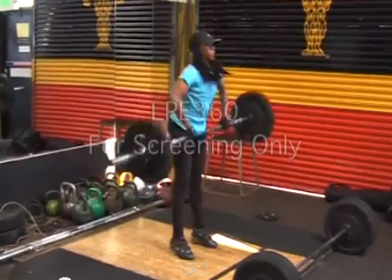 Ultimately she pulls with her arms even more and uses very little hip power. This photo shows how she is not maximizing her hip extension ability, and also how the bar is not aligned with her center of mass. 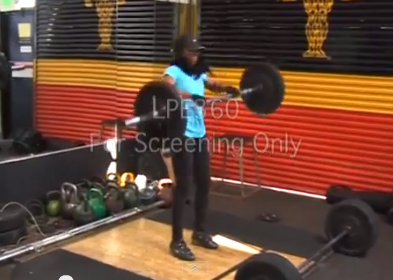 Jeter then doesn’t do a great job of absorbing the impact. She doesn’t jump her feet to move under the bar and receives it with her legs almost straight. One of the under estimated parts of Olympic lifts is that it provides the athletes with the ability to absorb force in the catch position. The lifts are not only about creating force, but absorbing it too. 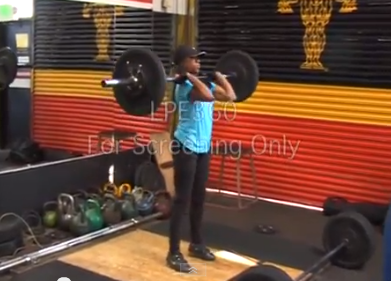 There are a couple other random thoughts about this video:

While I will never fault a coach for including cleans in their programming, in the case of Carmelita Jeter she is leaving a lot on the platform. Creating more power with her legs and absorbing more power in her catch position would benefit her performance on the track.

Peaking Your Sprinters and Field Athletes with the Olympic Lifts