Intraevent Commonalities.  Intraevent commonalities are technical features and movement patterns shared by lots of good performers. For example, if you take 10 highly successful hurdlers and study them carefully, you will find that they plant the takeoff foot similarly, displace at takeoff similarly, show similar movements of the lead leg, similar movements of the trail leg, etc. Obviously they will do some things differently… those things aren’t commonalities.

Why are Intraevent Commonalities Important?  Intraevent commonalities are important because they are the building blocks of technique. Every technique we teach our athletes should be based on intraevent commonalities. For example, Usain Bolt may be your favorite sprinter, but it would be very unwise to teach your athletes to start, accelerate, and sprint like Usain Bolt. He is a unique creature with unique skills (and unique faults). However, if not only Bolt, but all the great sprinters do some things the same way, then we should teach our athletes to do those things the same way. This means we should base the techniques we teach not on differences or idiosyncrasies athletes show, but on the things they share as common ground. 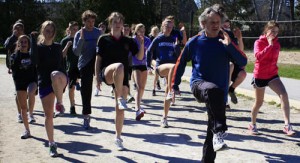 Implications for Coaching.  This obviously means that technique teaching should not only involve teaching the things great performers do the same, but should be limited to those things. One of the things that makes track great are the idiosyncrasies and styles athletes show. Hurdlers with peculiar arm actions, sprinters with unusual components of their block starts, throwers who reverse or don’t, jumpers using various arm styles. These are interesting and usually find their way into many conversations about the sport. But the bottom line is, if many athletes are doing them differently and still succeeding, then they must not be that important. Yes it’s fun to argue spin vs. glide, single arms vs. double arm, hitchkick vs. hang, etc., but they are all round holes that we should not drive square pegs into. This greatly simplifies the process of coaching… identify a few commonalities, teach them well, and allow style to evolve on its own.

Coaching Chores and Perils.  Obviously commonality based coaching is simpler and easier, but it requires two things. One is study. You have to know what these commonalities are. Film study is a must. A nice substitute is taking a class or clinic session from someone you trust who has already done the studying for you and getting the Cliff’s Notes version. The other requirement is a discriminating ear. Snake oil salesmen abound, and profits are often made with gimmicks. Remember flashy isn’t always better. Teach, sound, proven techniques and seek guidance from sound, proven sources.

Implications for the Athlete.  If I came out for track and I realized I had to perfect 50 different movements or skills to long jump successfully, I’ll probably end up playing baseball. However, if I only have to worry about doing 2-3 key things correctly in each phases of the event, that seems manageable, and I might even appreciate the challenge. Learning becomes a lot easier, and progress occurs faster.

Interevent Commonalities.  An interevent commonality is a movement or skill that is used in a variety of different events. For example, a left arm block occurs in every throwing event. The penultimate step occurs in nearly all of the jumping events. We see heel-to-toe, rolling foot contacts in all jump takeoffs and javelin plants. We see hip displacement in all the jumps and hurdle events.  We see huge similarities in the way forces are absorbed when we look at the right leg in throws and the penultimate step in the jumps. And of course, acceleration and sprinting skills are found in and needed for all of the sprint, hurdle, and jumping events.

Why are Interevent Commonalities Important?  Besides the obvious reason (how often they appear), Interevent commonalities are important because they are the basis around which we build our lesson plans for teaching technique. For example, if we see the same penultimate step in the long jump and high jump, we teach the penultimate step in a general sense, then apply that learned skill in both events afterwards. All good teaching progressions are rooted in the identification of interevent commonalities.

Implications for Coaching.  One implication is that we teach these commonalities first, before advancing to the events themselves. This is a huge help to the coach, because practice suddenly becomes much easier to organize. Since the jumping events have so many things in common, the jumpers can all train technique together initially. Throwers can all train together initially using generic implements (medicine balls, cones, etc.).  This makes coach’s life much easier, being able to do more teaching and work with fewer separate groups. Also, when the time comes to break up into individual events, everyone is already on the same page, further enhancing the organization levels of your practice. If you have a short season you may not have the luxury of a long preseason preparation period, but you can still mix event specific and commonality based practices to gain the same benefits.

Coaching Chores and Perils.  Obviously commonality technical coaching helps. But it requires two things. One is assembling a series of exercises or drills that provide an environment for you to teach the commonalities you have identified as important. Secondly, the drills don’t do the teaching by themselves, you have to be the link that inserts technique into the drill. This is done by identifying teaching opportunities in the drills and exercises you use.  Remember your drill is not a teacher, but a classroom. The great coaches aren’t great because they have better drills, but because they do a better job of identifying commonalities and addressing them while the drill is taking place.

Implications for the Athlete.  The single greatest reason commonality based coaching works is because to makes things easier for the athlete. By identifying and isolating a skill, the athlete can develop a better understanding of it, and can acquire more practice repetitions. This is especially true with multievent athletes. We all have athletes who compete in a number of different events. For example, teaching basic acceleration skills and patterns, and then tweaking them to adjust to sprints, hurdles, and jumps, is a lot easier than learning 3 separate skills.  Aside from talent, the single greatest determinant of success in sport is not how much the coach knows, but how much the coach can teach. An approach like this one, which makes learning easier for the athlete, can shorten the time spent between learning and mastery.


[Video] How to manage coaching multiple events at the same time…