Before I dive into the details for why sprinters and athletes should utilize this type of training, I’m going to first define what it is exactly.  Contrast Training was first introduced to me by Louie Simmons at Westside Barbell.  This type of training involves a “contrast” or some source of variable resistance as you perform an exercise throughout a range of motion.  Bands and chains placed around the bar are the most common implements used to create this effect.

Contrast Training addresses the concept of “Accommodating Resistance.”  Due to changes in the detail of movement throughout an exercise, the degree of difficulty or level of resistance working against us changes automatically.  I’m sure many are probably familiar with what I’m talking about.  Take the back squat as an example.  At the top it is easier to move the load versus the bottom of the movement.  Bands and chains then ensure that you provide more resistance where the load is lower so you work harder and build strength throughout a full range of motion.

Fortunately, this style of training can provide value to your speed and power development efforts as well.  Below I’m going to introduce a few concepts, and then show you how they help

This is one of the features of this style of training that I enjoy the most.  Traditionally, sprinters and athletes have regularly utilized bounding variations and other types of plyometrics to really ingrain leg drive and propulsion which creates triple extension at the ankle, knee, and hip, among other things, and I view contrast training in the same light.  It’s just another way of accomplishing this objective.

Our neuromuscular system tends to relax and quit driving during a lift as we reach lockout, or extension in a lift.  By adding a source of continuous overload via bands and chains, the muscles are forced to continue contracting harder and harder during the exercise, as we reach extension.

Triple extension is a key precursor to stiffness, vertical force production, stride length, and higher running speed, and any max effort squat or deadlift variation combined with contrast is going to reinforce the development of these abilities in the sprinter or athlete.  What is interesting is that 2 studies found that muscle activity of the quadriceps and hamstrings increased with contrast training versus non-contrast work. 1 2

Another benefit of working with bands and chains is that they require a sprinter or athlete to tighten up.  Any subtle change in body position will cause the bands to react, or the chains to sway in all directions, and we have to instantly maintain control of the bar by creating tension and stability at our joints.  I should note that even though bands and chains are generally implemented bilaterally off two legs or two arms, they can still be used unilaterally to really accentuate this effect like with sprinting.  I still think bilateral work can have some carryover though.

Control and preventing energy leaks during sprinting such as too much trunk rotation, or knee collapse is more common in beginner-intermediate level sprinters and can be remedied some with this approach, but there is still value to be had with contrast work for higher level athletes as well, which I will discuss shortly.

The next element has to deal with our muscle’s natural stretch to strength ratio, referred to as “Length-Tension Relationship.”  Quite simply, if we stretch a muscle too much it loses force potential and vice versa.  Keep in mind that this can be overcome by neural processes, and I’m referring only to the muscle here.  It’s understood that if a sprinter is too stiff when they land, then they will not rebound off of the ground and run as fast.  On the contrary, too much bend or compliancy and speed is lost.

There has to be a certain degree of pre-stretch to a muscle in order for it to act with more strength and power.  Keeping this in mind, there then becomes a standard range of motion where our muscles act most explosively during each movement.  The actual value that I located for this function is not practical and doesn’t make sense so I’m not going to reference it here.  But if you learn to analyze joint angles of the lower extremities during athletic based movements such as sprinting, jumping, and cutting it would seem that a three quarter to half squat seems to be optimal for power.  You can produce a high amount of force and express it fast at these points. 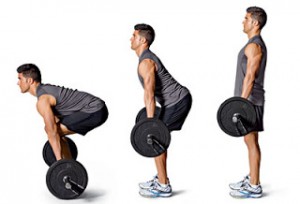 Analyzing a squat and deadlift with contrast, you will notice that the resistance and overload is peaking or near it in these ranges of motion.  Thus, you could argue that contrast training helps to optimize strength production in the ranges of motion that are common or specific to sprinting and other movements perhaps more so than straight weight alone.

Of course there is a time issue here, but working in certain ranges of motion using partial rep exercises such as: pin presses, board presses, scap drills, bridging, etc. has been shown to help develop other movements, and contrast training shares similarities to partial rep drills because you are adding an extra load at specific ranges so it may work.

Adding extra chains and bands to your max lifts does a great job at adding more total overload as well.   Athletes will be able to lift more total weight with this approach, which will create specific neuromuscular adaptations or changes that are also partly responsible for becoming faster.

For example, research has shown that strength training can induce both improved motor unit synchronization as well as rate coding. 3 4  Each of these adaptations that occur during high intensity resistance training can potentially make an athlete faster and are strongly encouraged with the use of bands and chains.

Chris Beardsley and Bret Contreras provided a tremendous amount of research on contrast training, 5, and I will disclose how their findings relate to this discussion.  The conclusion of the various studies that examined how bands and chains affected total barbell load showed that chains tend to really increase the amount of work performed in the middle part of a movement, while bands heavily increase output at the top of the movement.  6

Lastly and most importantly is the effect this type of training can have on power levels, which could have implications on running speed since power output has been shown to be integral to getting faster.  Of all the possible effects contrast training could have on performance areas, power output seemed to be the most promising according to several studies.  7 2 8 9

The benefits to be had with contrast training heavily outweigh the negatives for sprinters and athletes.  I should note that the studies referenced experienced trainees, so contrast training would definitely be a good addition for someone who has lifting experience already.  Linear and basic strength training progression systems will work great for beginners and this approach is not a must at this stage of development.  Exhaust the basics and then move to more advanced programming and techniques later on.

So let’s review.  Contrast training could help increase muscle activity levels according to emg reports which could affect sprinting performance, especially through the start and acceleration where knee angles and quad activity is higher.  This increased production from your lower body musculature will help to groove triple extension and other speed characteristics.

Control and stability are vital components that contrast training helps improve as well.

There is greater overload seen while using bands and chains in comparison to straight weight, which could accentuate neuromuscular adaptations and changes in the body.  Moreover, the overload will be provided at joint angles and phases of movement that are specific to the sprint pattern, and lastly, contrast has shown promise for developing power output which is a foundation for running speed.

I could not locate any direct studies of this technique on sprinters or athletes, but I still think it is definitely worthwhile, nonetheless.  I know it’s not specific, but neither is tempo work, active recovery, stretching, and other methods, and we all know they have confirmed value in a comprehensive speed training system.

#2-Israetel MA, McBride JM. Kinetic and kinematic differences between squats performed with and without elastic bands.  Journal of Strength and Conditioning Research 1: 190-194, 2010.

#7-Wallace, BJ.  Effects of elastic bands on force and power characteristics during the back squat exercise.  Journal of Strength and Conditioning Research 2: 268-272, 2006.

#8-Baker, DG. Effect of kinetically altering a repetition via the use of chain resistance on velocity during the bench press. Journal of Strength and Conditioning Research 7: 1941-1946, 2009.

Speed as a Primary Physical Component in Cross Country Training

Flexibility as a Primary Physical Component in Cross Country

Acceleration Progression – Working from the Top Down