General athletic skill is governed by physical maturity and individual developments in the five biomotor skills of speed, strength, endurance, flexibility, and coordination.

Development of specific athletic skill is governed by a training blend of the five biomotor skills, but with a strong emphasis on the singular skill type that is characteristic of the narrow demands of the chosen activity itself.  A shot putter or football offensive lineman has a strong need for an emphasis on isolated strength, but little need for endurance.  A 5000 meter cross country runner needs a strong emphasis on endurance development, with only a mild concern for isolated strength development.

Coaches need to be reductionists, and not generalists.  They need to analyze the demands of the physical activity and design and reduce the physical training that is needed within the five biomotor skills for the individual athlete to reach the level of success that is desired. 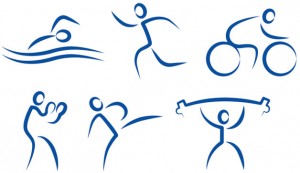 Perhaps the most general physical training activity known to cross country running coaches and athletes is a form of exercise now known as cross-training.  In essence, cross-training refers to an athlete training in sports and activities other than the one that athlete competes in, and then tries to justify doing them by claiming some sort of physical “carry-over effect”.  This thinking defies reductionist training theory and the law of specificity.

The birth of cross-training as we know it began in the decade of the 1980s, but its roots can be traced farther back to the start of the 1960s, when the notion of physical well being entered the American consciousness for the first time outside of the military establishment. President John F. Kennedy was a major proponent of the benefits of youth fitness programs and even wrote an article on the topic for Sports Illustrated Magazine.

Mr. Kennedy’s commitment can be summarized with this quote, “Physical fitness is the basis for all other forms of excellence.”

Like tentacles on a squid, new activities shot out from this centralist notion of the benefits to the average person of general physical activity.  These included aerobics, spinning, yoga, Pilates, and even jogging for non-runners.  It was the health club mystique.  However, except for leg injury re-habilitation and carefully controlled running in the water (not swimming), cross-training has no real place in an elite runners specific training program.

In many instances, the athletes who are most interested in cross-training, are those that who already have a tendency to chronically overwork and are looking for another way to punish themselves.  Cross-training has very little foundation in sports science research.  It has been described as a training myth that detracts from sound training concepts.  For a runner to get in the pool for anything other than a recovery session is time ill spent.  The same is true for biking or Nordic skiing for the runner.  It is just not supported in the research.

For the emerging and experienced cross country runner working away from specific endurance activities, time would be better spent strength training or working on flexibility, both are areas that tend to be ignored.  Most of the time, these components are ignored because the cross country runner feels there is not enough time to fit them in to their day.  Yet, those same runners think they can find the time to swim for thirty minutes or bike for an hour.  These non-specific activities fly in the face of systematic recovery of the endurance depleted energy systems.  Many times the coach encourages it.  Cross-training may be fine for the recreational athlete seeking to relieve the boredom of training, but for the high-level athlete it is virtually useless and probably harmful.

Remember, the purpose of a cross country running training plan is to emphasize specificity and to prepare the athlete to run fast.  Building a training program from careful selection of appropriate and event specific biomotor related elements like speed, good running mechanics, and specific strength training with a focus on intensity and optimal recovery in a well thought out periodized training plan is the road to take to deliver results for any endurance runner.

In the end it can be said that being a champion is not about what you were given, but what you are willing to give up.  Recreational, physically active hobbies in the disguise of non-scientifically supported cross-training activities are not appropriate outside of the designed training program.

The distance coach cannot be fooled by the health club crowd, recreationally active parent, or a catchy advertisement from a shoe company.  Keep the athlete on a steady and scientifically supported training plan and leave the hobbies for the four to six weeks each year that the distance runner is off from training and you have encouraged them to be active.