In part #1 of my previous article, (see: Does the Squat and Deadlift Improve Sprinting Speed? Part 1), you saw the proof for exactly why both the squat and deadlift are very useful choices when the number one goal is to get faster.  Now, the next question that often arises is what kind of squat and deadlift will give you the most bang for your buck in the speed development department?  Lets first look at the squat.

Click on the link below to access a comprehensive scientific review compliments of Dr. Bret Contreras that evaluates a somewhat recent study from a researcher by the name of Swinton back in 2012 (1):

I’m going to spare you a lot of the details right now and get down to the nitty-gritty and show you precisely how this information applies to athletes and sprinters.  And the best way I know how to relay the information listed above is to outline a chart. (see Table 1, below).  This chart compares all 3 types of squats performed in the actual study, along with pros and cons for each type relative to each other.

The exercises utilized in the study were the box squat, traditional squat, and powerlifting squat.  Afterwards I can then make a strong case for which type of squat is most valuable for any population looking to enhance running speed based on the information at hand.  I will also score each type of squat a 1, 2, or 3 for any given quality with 3 being the highest and 1 the lowest in influence. 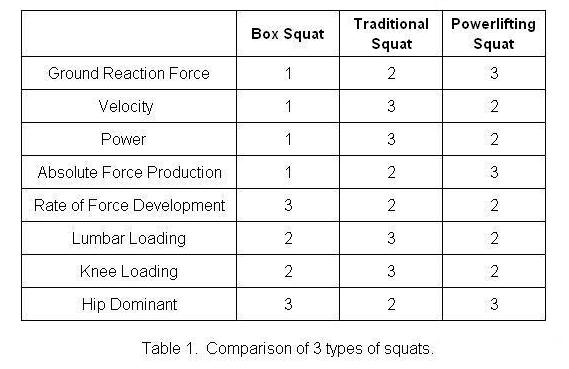 Now at first glance it would be completely evident and safe to assume that the Box Squat would probably be your last choice of squat for a sprinter or athlete, but the scores are a bit misleading.  The Rate of Force Development (RFD) for the box squat was up to 3-4 times higher than any other squat – which is crazy!

This quality is so important for sprinting speed, and it is a surprising result given that the dissipated SSC effect should have limited this type of production to some extent, and researchers couldn’t really give an answer for why the large margin occurred, but it definitely did.

Next, the reason GRF, power, and velocity were all lower in the box squat according to researchers, was due to the natural prolonged pause (amortization phase) that occurs momentarily between the eccentric-concentric transition off the box.

Moreover, the spine is most upright with a box squat and this type of compressive force has been stated in scientific literature as not being as invasive and dangerous as shear type forces that are more common with traditional and powerlifting styles.  The box squat also showed the highest amounts of hip abduction which is a key ingredient for faster running and alignment issues, and the box squat also presented with the most vertical tibia out of all 3, along with a greater sit back and potential hip hinge depending on the degree of torso lean for each according to the report.

There is even more though…. Researchers also went on to state that the box squat would most likely have the greatest “transfer effect” to sport among all 3 squat styles which is a game breaker for sure!

Anecdotally, I would make a few more arguments in favor of selecting the box squat over other styles for sprinters and athletes in most situations.  First, there is less of a need for ankle mobility with the box squat.  And I’m certainly not saying that athletes shouldn’t possess this capacity in movement, it’s just that with all of the impact and ground contact that occurs in sprinting, structural integrity may be an issue at some point, so I view it as one less thing you have to worry about as a coach or trainer without compromising training quality with the selected alternative exercise.

Soreness levels are generally much lower with the box squat since you are removing some aspect of the eccentric phase where a lot of muscle damage can occur.  In the past I happened to stumble across a couple books stating that this was the squat exercise of choice for ultra-strong NFL athletes who still wanted to grind heavy during the season and train the movement year round.

Muscle damage is fantastic in that it is one of the primary ingredients for building specific muscle mass at certain times throughout the calendar year, but during the competitive phase when workload is high, this is the last outcome that you want to create as a coach since soreness has been scientifically proven to lower performance levels markedly.  Also, there is a lot of other lower body training that is taking place which can predispose athletes too even more potential soreness (unilateral work, plyo’s, and conditioning) issues.

The box also serves as a failproof depth gauge which can remove a lot of the proprioceptive guesswork for the athlete, especially when intensity and workloads are very high.  If you work with groups or beginner level athletes then this is even more of an issue and constant cueing of proper range of motion can get old, so this setup can lend nicely and convenient for sure.  I want to note that this specific issue is more preferential than essential.

Last but not least, is the need for increased “tension” with box squatting.  Often times when first learning the movement athletes will relax and unknowingly rely on passive constraints like tendons and ligaments to support the weight when they relax their muscles, and then have to overcompensate and contract all of the involved musculature all over again.  Not only is this dangerous but it reduces force production capability of the working muscles for different reasons, resulting in decreased strength gains and less speed potential.  The ability to generate and sustain maximal tension is still very underrated in training culture and the box squat demands tension for success, especially since the stretch reflex is not maximized with the prescribed delay in motion.

In 2011 Swinton also completed a study examining the straight bar deadlift variation versus the hexagonal bar deadlift. (2)  I must say that the results were far easier to interpret than that in the squat review, and as far as labeling one type of deadlift superior to the other for the sake of improving human running speed, the choice becomes very clear that the hex bar reigns supreme.

The hex bar deadlift displayed higher total power outputs which is one of the main regulators of sprinting speed, it possessed higher levels of quad and knee activity with very similar hip level function, it decreased the load on the lumbar spine, you can lift much more weight leading to greater potential strength related adaptations, it’s less technical to teach, and requires less work and ROM leading to perhaps less soreness than conventional deadlifts.

With all of this being the case, I don’t think there is really any debate on which deadlift should be the permanent cornerstone of an athlete’s strength program.

By integrating either the box squat or hex bar deadlift throughout your training cycles, you will satisfy a vast majority of lower body development in the strength department.  Conversely, it would be fair to estimate that with each of these exercises being predominantly concentric based, you would be then neglecting eccentric contractions in your training which is highly responsible for top speed potential, leaving your athletes and sprinters at a distinct disadvantage.

It’s true that if you were only to perform max effort training then there would be an issue, but the solution here is to ensure that you are supplying plenty of single leg exercises, agility-lateral movement training, and a host of plyometrics so that each athlete can hone the eccentric phase of motion.

Furthermore, dynamic effort drills, free squatting, front squatting, and deadlifting w/deficits can and should be prescribed to further develop eccentric contractions.  And once everything I just mentioned is being practiced on a regular basis, you pretty much cover all of your bases and affirm that your training approach is on point from a strength standpoint.

#1-Swinton, P. A biomechanical comparison of the traditional squat, powerlifting squat, and box squat. The Journal of Strength and Conditioning Research 26: 1805-1816, 2012.

Supplemental Lifts for Athletes and Sprinters