Do the squat and deadlift improve sprinting speed?

Since I first entered into the speed training realm, there has always been some degree of debate amongst many professionals concerning whether or not the squat and or deadlift was necessary for increasing human running speed.  In this article we will explore several studies and sub-topics and find out whether or not this type of exercise is indeed essential for a sprinter or athlete.

Before I go on though, I want to be clear that I’m not advocating either of these 2 specific exercises as the be all end all to speed training, as there are several other elements that need to be a part of an athlete’s program in order to yield maximal benefit from training.

However, based on the evidence, both in the real world and from research settings the consensus is pretty obvious that both the squat and deadlift help us run faster.  Look at several high levels coaches throughout the field and throughout history (i.e. Charlie Francis) and you will notice that they opted to integrate heavy lower body strength training at precise times throughout the annual training plan to improve performance to the highest degree possible.

Right now I want to review a handful of studies that I located on the topic.

The first study comes from Wisloff in 2004 on a large group of elite soccer players.  Please note, that about half of the research that I’m going to disclose to you references primarily team sport athletes.  At the end of the article I’ll show you why this information is still very valuable and practical for sprinters, so just stay with me.  What Wisloff found was that half-strength squat performance correlated very strongly with vertical jump height and 40 yard dash performance. 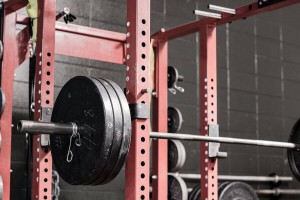 The next study I found is compliments of a researcher by the name of Young from the Strength and Conditioning Journal.  Young was able to determine that relative strength (strength to bodyweight ratio) levels and quadricep development were key regulators of short sprint ability, while glute and hamstring strength along with reactive strength (force production with motion present) were largely responsible for maximum speed capacity.

Obviously, both the squat and deadlift are great training means for satisfying the initial training qualities mentioned in this particular study.  Moreover, in 1999 there was another study from Mcbride that assessed the power outputs through various exercise tests for an elite group of powerlifters, olympic lifters, and sprinters.  Power to bodyweight ratio scores were the highest in sprinters, with olympic lifters coming in a close second.

What may be surprising to some though is that the average strength to bodyweight ratio for the sprinting group was 2.5 times their own bodyweight!

The next study comes from Mann and his team who filmed several male and female sprinters in competition.  What they found through a thorough mechanical assessment was that strength acquisition and technical proficiency were 2 essential qualities that the better sprinters possessed.

Finally, I was able to locate 4 more studies and a credible online scientific review from Bret Contreras which indicated that either relative strength, concentric half squat strength, and or leg stiffness showed a strong relationship with either 40 yard or 100 meter dash performances.

I should also mention that there is pretty split debate it seems on whether or not general strength or specific strength is necessary for advanced level sprinters.  Everywhere I read and researched agreed that building a solid base of maximum strength will help out any novice or intermediate level sprinter, but it’s not entirely clear whether or not building a ridiculous squat or deadlift will improve an elite runner.

Here is something to consider though for elite athletes.  There is absolutely no doubt that with very low ground contact times exhibited by elite sprinters much of what is acquired under or over a heavy bar in the weight room will not transfer onto the track in terms of absolute force production, unfortunately.  But with the margin of skill sharing an inverse relationship with the level of sprinter, every little bit will count in the long run, and why not put yourself or an athlete you train in the best position to excel?

Moreover, every study showed the value of building a heavy squat or deadlift and the positive effects it had on the quadriceps, vertical force production, and acceleration levels which are important for all sprinters and athletes.

I’m sure there are several advanced level sprinters and coaches who still undermine the value this type of training has to offer because there guys or girls are currently good enough, or they are apprehensive for whatever reason, or ignorant, but it could be a game changer, especially in longer bodytypes.

Another common issue I see relevant to this discussion is the over emphasis still placed on speed and special endurance work in many of the local track programs I see and the feedback we get from the sprinters who train with us.  I’m not sure how this relates elsewhere on a national scale, but I figure it’s worth mentioning in case anyone else encounters the same thing I do on a regular basis.

There is no doubt specific endurance training is essential to lowering times, and it’s arguably the  least labor intensive and smartest approach for beginners and intermediates, but at some point there will need to be an equal focus on both general and specific strength development for further progress, facilitated recovery, and injury prevention purposes over the long-term.

Lastly, although all of the force gained in the weight room will not directly carryover in practice and competition, there still may be much benefit to be had physiologically.  There are several local adaptations that occur in the presence of heavy strength work in the form of squatting and deadlifting that should not be overlooked by the track and field population.

For example, increased motor unit recruitment/synchronization, local hypertrophy, and fast twitch fiber conversion to name a few.  All of which could lead to greater power and rate of force development when the time comes.  In other words, strength work could prime and potentially enhance what speed training delivers for the athlete.

In the next article, I will bring everything I have to the table on which type of squatting and deadlifting you should primarily perform if you are a sprinter or athlete, so stay tuned…

Does the squat and deadlift improve sprinting speed? (Part 2)