The start of a cross country (or track and field) season brings plenty of excitement for both athletes and coaches.

The anticipation of all of the adventures that are about to occur is what makes activities such as this so much fun.  Even teams that practice all summer seem to shift their level of anticipation as the official date of the cross country season approaches.

Successful cross country running needs both individualized training plans for the athletes and an overall organizational plan for the team.  Both plans need to be structured with as much quantitative, measurable focus as possible.  The plan for the team should revolve around where the squad is today and where it should be at the end of the season if the endeavor is to be to be considered a success.

Like any sort of goal, there needs to be checkpoints along the way toward the long term outcome: intermediate goals.  These goals need to be associated with a measuring stick that can be compared to other teams past and future that make up the cross country program of a school.

There are four steps involved in successful team development whether one is coaching a Little League baseball team or a collegiate football team, and this includes high school cross country.

None of the stages can be skipped or minimized if success is to be the outcome.  The only variable is in how long coaches and their teams spend on each of the four steps.

An organized and experienced coach is definitely a plus in making the steps flow along from one stage to another smoothly.  Coaching stubbornness, indifference, inexperience, or a laissez faire team structure are all roadblocks to the process.

Most high schools in America officially begin their season in the middle of August and conclude their championship season around the middle of November.  All in all most programs have an official season of about fifteen weeks. 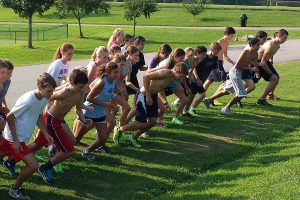 The four steps in team development do not break the season up into equal segments of time, rather the first and fourth step need to be rather short stages compared to the middle two.  If the first step gets too long there will not be enough time for the rest of the steps.  If the last step is too much time then the peaking period leading to a taper is too long compared to the rest of the season.

Step 1.  The Forming Stage.  The first step in building a cross country team is called the forming stage.  This is the time of the season for the coach to finalize the team roster, get everybody eligible, hand out uniforms, and do some last minute recruiting of athletes.

The forming period should also be when everybody on the team learns everybody else’s name and a little bit about each other beyond running.  The captains and other older leaders play an import organizational role in the forming period.

With quality captains and good leaders, plus a motivated and experienced coach, the forming period can be accomplished in a week for teams of forty runners or less and a couple of weeks for larger teams.

Step 2.  The Storming Stage.  The second step is the real variable in successful team building and is called the storming stage.  This is the block of time after the forming stage when workouts, time trials, and a couple of early season meets are used to determine the varsity runners and the overall performance pecking order on the team.

Some runners may have prepared all summer for the cross country season and some may be returning varsity members, while others may be rapidly improving young runners.  Many are just beginners with high hopes.

Whatever the circumstances, the group has to come together into one working team as quickly as possible while allowing enough time for the situations within to work themselves out.  It is a time of psychological warfare between friends and among people who barely know one another so it is important the coach recognizes the issues and gives enough guidance and leeway for the situations to be actively ironed out.

If no storming seems to exist on a team, it is a sign of a lack of individual competitiveness which is another issue.  Ideally, even on a big team the storming period should be well through after about three weeks (plus the two week forming period).  Five of the fifteen weeks in the season are now gone.

Some storming periods could linger into five or six weeks alone which results in a critical lack of time for the remaining steps to follow.  It also makes for a miserable season for all.  Teams that never seem to “put it together” probably suffer from a storming period that lasts much too long.

Step 3.  The Norming Stage.   The third step in successful team building is called the norming stage.  Ideally, this will be the longest period of time in the cross country season, and on well functioning and organized teams, should cover seven of the fifteen weeks.

This block of time is characterized by containing most of the competitions that lead up to the championship portion of the season.  This is the time of hard work, frequent races, and little drama on the team.

The runners have accepted their position on the team and while they are working hard to improve that position there is no illusion, just reality.  The runners all help each other get through the toughest workouts.  Their interest does not wane and move on to other things.

The leaders lead effectively and the respect for each other on the team comes from effort, dedication, and commitment and not talent.  The meets get ever more important during the norming stage and younger runners may eventually emerge that displace older runners.  This happens in all sporting activities, and like injuries, just needs to be accepted without regret.

The coach’s role during this period is to make sure all the runners have bought in to the system and character of the team.  If necessary, pull athletes aside that haven’t figured it out and point out the fun they are missing.  Then help them understand what they need to do to find satisfaction in a team situation.

Step 4.  The Performing Stage.  The fourth and final step in successful team building is called the performing stage.  This is the championship portion of the season and may consist of conference, district, section and state meets.

These races usually cover the last three weeks of the fifteen week season.  The competitions are crucial and usually involve team elimination stakes.  The team members feel the pressure and it affects other areas of their lives.

The coaches training program probably consists of a physiological taper to strengthen the body through increased rest.  The athletes are not running as much, but the intensity is high.

This is an important time for coaches and their teams.  Everybody must believe and trust one another if the team is to run to success.  It has taken fifteen weeks of highs and lows to get to this point, but hopefully the athletes are fit, anxious and ready to form their racing packs in the most important races of the year.