Most successful track coaches prescribe repetitive physical drills for their team members on a regular basis to facilitate the learning of an under-developed skill.  Warm-up activities are probably the most commonly done drills throughout the team, but other events, especially those in the field, have a selection of drills that are necessary for successful learning.  Doing drills just to do drill work is a common training myth, as is prescribing drills that are not event specific.

Depth jumping on and off boxes is a commonly done plyometric drill on track teams.  When this drill is done properly, the body’s center of mass passes through a strong vertical direction because of the elastic reflex of the leg muscles and tendons in order to land and forcefully get back up onto the box.  This direction of movement is much too vertical to be appropriate for a middle-distance runner who has a center of mass passing through a mostly horizontal direction when running.

Basic bounding drills, or even walking split leg lunge drills, are much more effective for strengthening middle-distance runners, and leaves no unnecessary residual fatigue as depth jumping does.  There are additional drills that should be introduced to your middle-distance runners to improve their non-endurance biomotor athletic skill learning.

In the decade of the 1950s, a Polish coach, Gerard Mach, introduced a simple, but valuable series of drills that are appropriate for teaching all athletes the biomotor concept of speed.  The drills are low impact and are useful to athletes such as middle-distance and long distance runners who are usually found to be under-developed in speed, especially as novice and emerging runners.

Mach designed the ABC Drills to specifically strengthen the muscles used in postures and actions that are congruent with those that occur during the action of sprinting.  They were not designed to be what most drills are, that is technique drills.  However, it is through strengthening in the specific positions that technique is improved.

Each of the ABC Drills is divided into a march action, a skip action, and a run action.  The progression was designed to be from marching, to skipping, to running by the athlete.  The drills should be used daily as part of the middle-distance runner’s warm-up and can also be used as part of a training session that emphasizes either power speed or strength endurance. 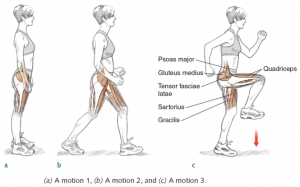 In the A Drill, the movement is performed while marching and then more dynamically as the A skip or A run.   The action in all three instances is propelled by the hip flexors and quadriceps.  Knee flexion occurs, and the pelvis is rotated forward. The arm carriage is intuitive and used to balance the action of the lower body as opposed to driving it. The arm opposite to the raised leg is bent 90 degrees at the elbow, and it swings forward and back like a pendulum, the shoulder joint thus acting as a fulcrum. The opposing arm is also moving simultaneously in the opposite direction.  Both hands should be held loosely at the wrist joints and should not be raised above shoulder height. The emphasis is on driving down the swing leg, which initiates the knee lift of the other leg.  Eyes should be directed out straight ahead to keep the torso posture tall and square. 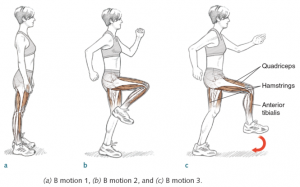 The B Drill is dependent on the quadriceps to extend the leg and the hamstrings to drive the leg to the ground, thus preparing for the action of the body impacting the ground.  In order to do this, the quadriceps extend the leg from the position emphasized by the A Drill to potential full extension, and then the hamstrings group acts to forcefully drive the lower leg and foot to the ground. During proper sprinting the ankle and foot dorsiflexes, which positions the foot for the appropriate landing; however, while performing the B Drill, dorsi-flexion should be minimized so that the foot lands closer to mid-stance. This allows for less impact solely on the heel, and because the biomechanics of the foot are not involved as in running, it does not promote any forefoot injuries.

Want Every 800m – 1600m Workout For The Entire High School Season…From January Through Nationals In June? 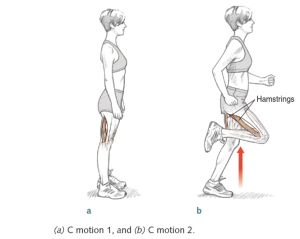 Finally, the action of the C Drill is dominated by the hamstrings.  Upon impact the hamstrings continue to contract in order to pull the foot upward eventually coming directly underneath the glutes, and with this action begins another gait cycle. The emphasis of this drill is to pull the foot up, directly under the butt of the runner, thus shortening the arc and the length of time performing the activity so that another stride can be commenced.  The C Drill is performed rapidly by the athlete, in “staccato-like” bursts. The arms must also swing quickly, mimicking the faster movement of the legs, and the hands come a little higher and closer to the body than in either the A or B Drills. A more pronounced forward lean of the torso, similar to the body position while sprinting, helps to facilitate this motion.

Gerard Mach has brought forth a series of drills that indeed improve the specific strength and posture position needed to run fast.  He is credited as being the originator of the modern system of speed drills.  The drills have now stood the test of time.  The Mach ABC Drills should be the fabric used regularly for speed improvement activities in the middle-distance runner.