Most cross country coaches’ work with athletes that have not yet reached absolute physical maturity and awareness of growth and development issues in their distance runners.  Many of these same coaches have teams with both boys and girls on them, which raises the concern of different rates of development.

Even coaches that have a program of one gender, grades nine through twelve, have athletes that are scattered on a continuum of physical growth and maturity and must deal with issues surrounding this fact on a daily basis.

Growth and development issues in cross country begin with the basic indicators of height and weight as these two variables are the most useful in examining rates of change and are controlled by the genome signaling of chemical factors such as growth and sex hormones.  Generally, females mature about two years earlier than males.

Height and weight do not increase on a linear curve.  Height and weight increases cease to be a growth and development factor once maturation is reached.   However, weight change beyond what is controlled by the genome does not cease upon maturation and in most cases is a behavioral or lifestyle issue.

Figure 1 shows that height increases rapidly during the first two years of life to a value of about 50% of their later adult height.  Just before puberty, the rate of change in height increases markedly, until full height is attained by a mean age of about 16.0 years in girls and 18.2 years in males.  Height and weight basically determine stride length, stride rate, and running economy in cross country runners. 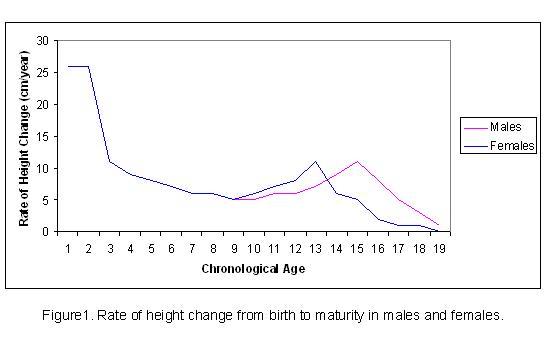 As with height, the peak rate of growth in body weight occurs at approximately 12.5 years in girls and 14.5 years in boys, slightly later than height but with a similar trend as height (Figure 2).

The total weight of an individual is found in water, a few minerals and salts (ex. 4 g of iron), and four tissue types: connective, muscle, nerve, and endothelial.  Tissue develops and matures at different rates as directed by gene expression. 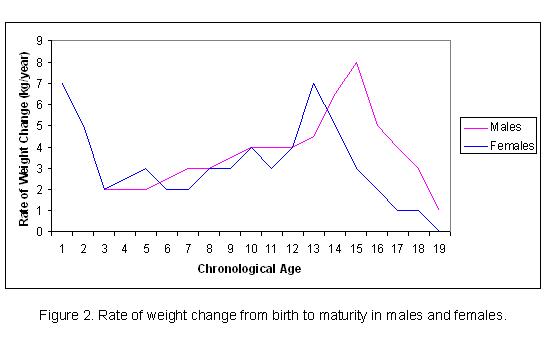 A certain percentage of body fat is found in stored fat and this changes with physical development, puberty, and maturation from runner to runner.  Fat cells (adipocytes) form and fat deposition begins in these cells early in fetal development, and filling continues indefinitely thereafter.  Each adipocyte can increase in size at any age from birth to death.

Genetic signaling directs that the number of adipocytes becomes fixed within the first three months of birth.   However, the most recent evidence suggests that as dietary fat is added to the body, existing adipocytes continue to fill to a certain critical volume.

Once these cells are filled to this point, significant haptoglobin present in the blood signals gene expression that directs the formation of new adipoyctes through protein synthesis in the ribosomes of the existing (now filled) adipocytes.

It has been shown that when females reach puberty, their estrogen levels increase, which promotes the deposition of body fat.

When males reach puberty their testosterone levels increase which promote the shedding of body fat (Figure 3).  This has a direct consequence to the running economy of a cross country runner.

Recent studies suggest that gene expression accounts for 70 percent of the variation in adolescent’s body weight, with lifestyle and diet accounting for the remaining 30 percent.

Chronic cross country training and/or voluntary dietary restriction will lower the percentage of fat in the body, but the gap between males and females needs to be kept wide (with all other factors equal) for a healthy lifestyle.

Using only the variable of body fat percentage, it is evident why females in the 11-13 year old group have better running economy than young males of the same age; their metabolic economy is more efficient because of a lower body fat percentage.  The reverse is true for mature males and females. 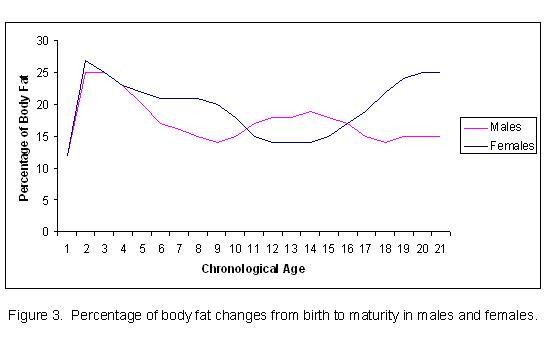 It would be difficult at best to train boys and girls together using the same daily workouts with these growth and development issues in mind.  For example, younger females can handle much more training volume based on fuel stores than males can at the same age.

But then after puberty in each (which occurs at different times), the fuel store issue reverses itself.  The same is true of motor skill improvement which is tied to speed development.  A thoughtful coach must keep all of these issues in mind.