Importance of the High Jump Approach 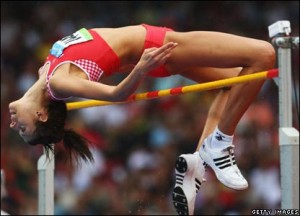 When projected into flight, the center of mass of any object (including the human body) follows a predetermined, predictable, unalterable parabolic curve. Thus, establishment of the proper flight path is totally dependent upon proper force application during ground contact. Since all takeoff forces (including eccentric forces) are applied while still in contact with the ground, any resultant rotations are produced during ground contact as well. These rotations continue into flight and assist or interfere with efficient landings and clearances. In light of these facts, it is obvious that proper force application at takeoff is the only way to produce good performances in the jumping events. Although good takeoffs produce good jumps, there are prerequisites to the execution of correct takeoff mechanics. A person running at relatively low speed can demonstrate greater accuracy in aligning the body into positions favorable for efficient takeoffs, because prior mechanical errors can be easily corrected. However, when dealing with the high velocities we see in competitive jumping, the correction of errors occurring during the run is limited due to time constraints. Also, at these higher velocities, reflexes play a much greater part in the pattern of movement, again minimizing the chances to correct earlier errors in body positioning. The execution of any part of an athletic endeavor is largely dependent upon the proper execution of the next cycle. For these reasons, correct establishment of initial mechanics is crucial, and special consideration must then be given to the the type of start employed. This is especially true in the high jump, where shorter approach distances give even less chance for correction of errors. In summation, an error during the high jump approach run will cause the takeoff, and thus the jump, to be compromised to some extent. The resultant jump is simply a modification of running mechanics, for better or worse. Considering that good execution of the run is prerequisite to proper takeoff and flight mechanics, it is logical that much time and effort be devoted to teaching this technical component, developing it into a contributing, rather than a hindering factor.

Commonalities of the Horizontal Jumps Approach

Observation of the acceleration process reveals many mechanical parameters which develop as the process unfolds. Body angles progress from a forward body lean to a nearly erect posture. Toeoffs at the onset of acceleration occur far behind the center of mass, then advance until they are occurring only slightly rearward. Unique firing orders of the leg extensors appear, stability must be maintained, and the existence of certain postural alignments are crucial to efficient acceleration patterns. All of these processes and considerations are of equal importance in the high jump approach.

Before beginning discussion, it should be pointed out that the following descriptions pertain to a high jumper employing the flop style, approaching from the right side  (left-footed takeoff), using a 10-stride approach.

As in any jumping event, development of momentum early in the run is necessary to set up correct mechanical execution later in the approach. This momentum must be developed early, because shorter ground contact times at higher velocities give us less opportunity to apply force and generate impulse. A drive phase is the tool of choice to develop this momentum. This drive phase is characterized by forward lean, powerful hip and knee extension and long ground contact times. The drive phase in the high jump is considerably less radical than in the horizontal jumps. The initial forward lean established at the start is less exaggerated, and the process of increasing body angle to erect posture is practically complete by the fourth stride.

Layout of the Approach

The benefits of a curved high jump approach in the flop high jump are well documented, but development of momentum along a curved path is a difficult procedure. For this reason, high jumpers generally employ a straight to curved approach. The radius of the curve should be tight enough to generate adequate centrifugal force to allow easy bar clearance. Higher speeds also generate more centrifugal force, so faster jumpers can employ larger radii. The approach should be laid out so that the tangent to the curve at the point of takeoff is roughly in the direction of the far back corner of the pit. This insures that the jumper will not travel too far along the bar but will have adequate time to execute clearance movements. The point at which the jumper exits the pit during run-throughs, or the depth into the pit gained during the jump, can be used to evaluate the final angle of approach.

Initiation of the Curve

A smooth transition from the straight to the curve ensures that the curve can be run properly. Any cutting, stepping out, or other improper transition into the curve effectively eliminates much of the curve, as well as its associated benefits. A review of film and literature reveals that most high jumpers touch down on the fifth step with the right foot turned inward slightly. The curve then is initiated on the sixth stride. Although these observations are correct, there is much more to the preparation and execution of this process than is usually documented. There are two prerequisites to the smooth transition into the curve: momentum and anticipation. Jumpers who fail to develop momentum during the first few strides of the approach often use the transition as a chance to compensate, usually by cutting and pushing hard off the fifth stride. Momentum is developed too late and poor jumping postures result. The slight turning in of the fifth step is a result of a slight turning of the pelvis. This pelvic turning evident on the fifth stride can only be accomplished by modifying the pushoff from the previous stride. This means that some initiation of the curve is occurring as early as the fourth stride. Waiting until the fifth stride to initiate the curve results in failure to perform these early modifications. These must be anticipated early in the approach to be performed correctly, much as a backseat driver must let you know ahead of time where you must turn.

Since anticipation and early initiation of the curve are so important, the wisdom of placing a checkmark at the location of curve initiation should be questioned. Cues formed to teach the transition into the curve must be anticipatory in nature.

Many mechanical modifications take place as the curve is run. An inward body lean is developed. The outside arm works somewhat across the body, and the inside arm drives backward a bit further than before in opposition. Most importantly, the feet must be applying the force outwardly (as opposed to a downward direction) as the body assumes its inward lean. Many high jumpers cosmetically create the modifications listed above, without applying this outward force. This results in an inefficient, inelastic sitting type of running posture, much like a person trying to run on a slippery floor. Cue systems built around foot pressure, or applying pressure with certain parts of the feet (inside of the right foot and outside of the left foot) can help teach proper force application. Another important consideration is elastic energy conservation. Oscillations of the hip axis in the transverse plane and free elastic movements must continue as the curve is initiated and run. Tightening up, drawing the arms into the sides, and assuming sitting postures are symptomatic of poor elastic energy conservation. These actions greatly inhibit the creation of stretch-shortening cycles in the spinal, pelvic and shoulder musculature. This results in inefficient takeoffs and difficulty in presenting the back to the bar.

Steering refers to the adjustments in stride length made in order to take off from a desired location, whether it be from a takeoff board or a certain spot on the runway or apron, etc. Although it is desirable to develop accuracy in the approach through rehearsal, it should be realized that steering is a desirable tool, useful for making certain necessary adjustments and even for preventing  injury in some instances. Steering ability exists to varying degrees in different individuals, but is a trainable quality. The steering process is primarily dependent upon visual sensory input. It follows that visual location of the target should occur as early as permitted by body alignment— at the onset of the run if possible—to facilitate this process. This visual contact should be maintained as long as possible. Usually visual contact must eventually become peripheral, and later must be aborted or readjusted in order to keep the head in proper postural alignment ready to pick up other visual landmarks. This should not present a problem. By establishing visual contact early and maintaining it as long as possible, jumpers develop a sense of their velocity and the rate at which the target seems to be approaching, so that this process need only be cognitively continued (target tracking) to execute an accurate takeoff. High jumpers who watch a mark set directly in front of their checkmark (out from the near standard) during the first part of their runup then shift focus to the bar or standard in the middle of the run give themselves little chance to establish good input to the steering mechanism. Jumpers using such a mark should locate it prior to starting the run to determine the initial direction, but should focus on the near standard during the start and first half of the approach. This provides early information to the steering mechanism as to the location of the takeoff spot. Once into the curve, the jumper should find the top of the far standard. This will provide an erect object by which body lean may be gauged and the location of the crossbar may be cognitively established early so that clearance movements can be efficiently performed. In addition to setting up accurate steering, this method helps greatly to set up a smooth, anticipatory transition from curve to straight.

Much has been written about the correct location for takeoff in the high jump. Since our objective is to clear the bar in the middle, it is unreasonable to define a certain ideal takeoff point for all jumpers because the distances they cover during flight and the arc of their flight paths differ. Better jumpers have longer flight paths which call for takeoffs farther away from the center of the bar and farther out from the crossbar. The steering mechanism works to put the jumper in position to accurately execute an anticipated takeoff mechanism, along with its associated flight path. Steering to inappropriate locations (too far out, too close in) occurs when a mechanically improper takeoff is expected. These expectations usually arise from past experience, incorrect prior positioning of the body, or both. One example would be a high jumper who senses that he has not developed enough centrifugal force during the takeoff to throw himself over the bar. Steering to a point too close to the bar is a convenient compensating strategy. Another example would be a jumper with a steeply peaked flight path who takes off from a point close to the center of the bar to allow clearance at the middle. Improving the approach and/or takeoff mechanism usually solves the problem of training an athlete to take off from a correct location.

Is Back Arch Important in the High Jump? Read more

Stretching and chopping are steering tools we are all familiar with, but the curved high jump approach makes that lateral steering a dangerous option. Often jumpers who feel crowded will step out of or deepen the curve to create space. This makes correct alignment of body segments at takeoff difficult, and usually results in excessive lateral rotations during takeoff and flight.

How to Quickly and Easily Fix Common Errors in the Long Jump, High Jump, and Triple Jump.