The athlete profile is a tool that knowledgeable coaches use to shape a macrocycle of training and physical development for a middle distance runner.  At its core, an athlete profile is usually a well-documented history of past workout and race performances that is then used to guide the direction of future training.  To that end, we will consider how middle distance coaches actually coach speed, not time.

Keeping an athlete profile should be more than maintaining an ongoing list of final and split time performances from races.  It should most resemble a grid that includes racing and workout data from anaerobic and aerobic training sessions, time trials data, and even projected performance data sets.  The profile should clearly point out runner strengths and weaknesses in a measurable way that makes sense to both coach and athlete.

For these reasons, the more advanced athlete profiles do not use just raw times to describe performances across race events and workouts.  A suggested, more valuable time unit to use in profile data is a standardized unit that shows the relationship of time to distance.

The rate of movement in one direction by a runner is important in analyzing a timed performance.  A coach should mark all time-graded performances, from workouts to races, in meters/second when entering them in an athlete profile.  In that way, a true comparison of the rate of movement, from maximum speed–through glycolytic speed–through race distance speed–through aerobic speed can be made.  From this data, graphs can be plotted, trend lines drawn, and weaknesses and strengths of speed at various distances can be determined for the athlete.

Let’s look at prescribing pace for anaerobic work sessions.  A good determiner of workout pace in the anaerobic training domain is with derivatives of an athletes current 400 meter time, but a better determiner is with a fully automatic, electronically timed, 30 meter effort done on the fly (acceleration is prior to commencing the 30 meter distance).  Not every distance coach is equipped to get electronically timed 30 meter efforts in this way, thus most rely on exhaustive 400 meter times, which will be close enough in most cases.

Both of these tests will give a coach raw final time for the distance covered.  It is then simple mathematics to get meters per second to determine the actual speed at varying distances.

If Dylan raced Jack in the 400 meters who would win?  Scientific studies have shown that a maximum effort run of 30 meters (on the fly) to be about 113-114% of an exhaustive 400 meter effort when comparing speed.  Let’s just assume Dylan to be on the low end of individual variation at 113%.  His 30 meter speed of 9.04 divided by 1.13 = 8.0 m/s 400 meter speed.  His 400 meter time at that speed should be 50.0 seconds when dividing 400 by 8.  Dylan would win the race based on his speed, but of course, there are other factors such as will and determination that must be factored in as well.

Exercise scientists have proposed percentages of 400 meter speed (i.e. anaerobic capacity) in meters per second, and percentages of 30 meter speed (i.e. maximum speed) in meters per second for prescribing training intensities for the full range of anaerobic work as shown in table 1.  The only variable a coach will need to know is the athletes 30 meter time or their 400 meter time, and those current marks should be in their individual athlete profile.

Referring back to Dylan, his 400 meter exhaustive speed is 8.0 m/s.  The Special Endurance 2 workout for him today is designed to be 4 x 300 meters.  His target speed is 104% of that (table1) or 7.69 m/s.  Divide 300 by 7.69 and his exhaustive 300 meter time would be 39.1 seconds.  But, today he is doing four 300 meter repeats, not one.  His coach decides on 43 seconds for each of the four repeat 300s as a workout for Dylan.  Now a determination needs to be made on the recovery interval Dylan will need to be able to complete four 300 meter repeats in 43 seconds successfully.  His coach decides it will take a five minute recovery interval.

A chart can be developed to determine aerobic speed as well, and that is shown in table 2.  The index marker for aerobic speed is not 30 meters or 400 meters as in anaerobic training but is 2 mile effort to exhaustion or vVO2 max m/s speed. 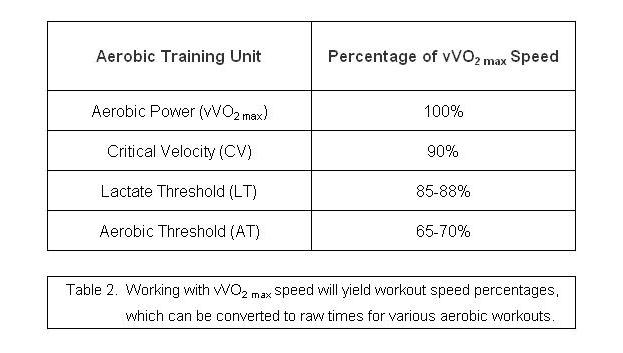 Jack’s athlete profile has a table that looks like table 3 as part of it, so it is easy for him or his coach to try to line up current race or workout speed.  As any of Jack’s current raw times change during the season his chart will have to be updated.

However, with many athletes on a team, it is quite a hassle to update the table after every race.  A better plan is for Jack or his coach to update the profile about every three weeks after a number of races have been run.

Another useful feature of table 2 is the set of goal columns on the far right side.  Early in the year, Jack and his coach determined reasonable goals for him in the 1600 and 3200 events.  These raw times were converted to speed values as visual evidence to show Jack the concept of speed and not just time, and what he needs to improve on during the season. 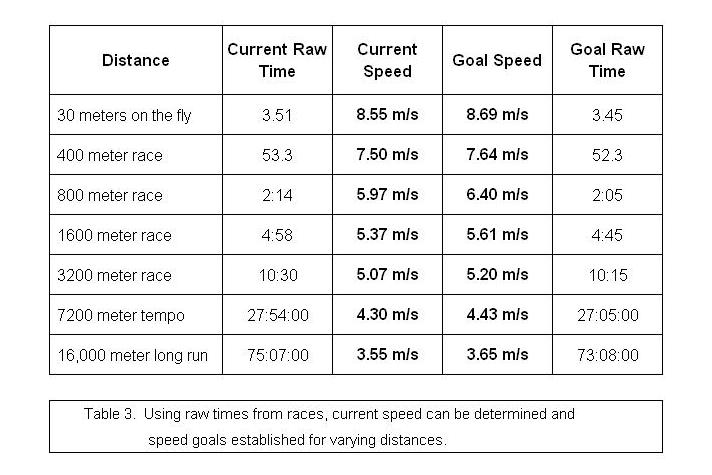 Jack someday wants to run 4:20 for 1600 meters in high school.  He needs to know that the speed for accomplishing that is 6.15 m/s.  Jack will have to work above and below his current speeds at various distances to develop faster 1600 meter speed.  He is only a sophomore, but according to table 3, he is now only capable of carrying 6.15 m/s speed for about 700 meters.

Hopefully, he will get there in the end, but at least he knows what he has to do because his coach coaches speed and not time.