Mitochondria are the aerobic powerhouse organelles of cells.  If a type of tissue does little aerobic work, then there are just a few mitochondria in the cells of that tissue, but if the tissue is a real aerobic workhouse, then the cells that constitute it are loaded with mitochondria; with the capacity to build many more in the ribosomes if the stimuli to do so is sufficient.  Most humans exist quite well on low-intensity activities, as the days of out-running saber tooth cats are thankfully over.  In this article we will review Intensity – and what it means for middle distance training.

The aerobic ability of humans is well documented in their evolutionary history.  In a time-span of just a few thousand years, humans left Africa and lower Asia, and then literally migrated all over the World, mainly by walking.  Because walking has no flight-phase (low intensity) in its gait pattern, the energy demand is low per-minute walked and thus maintained for the most part by the aerobic portion of the energy system which is contained within the numerous mitochondria of the cells.

Mitochondria found in animal cells have a fascinating evolutionary history on Earth.  About two billion years ago mitochondria were free-living unicellular organisms that were able to utilize atmospheric oxygen to convert carbon-based molecules (fuel) to usable cell energy – adenosine triphosphate (ATP).  Oxygen in the atmosphere was fairly new to the history of the Earth back then, as it was a product of plant photosynthesis which was in its infancy at the time.

Mitochondria thrived and soon began invading other unicellular organisms that were also present at the time in an attempt to derive an existence that was more complex and protective than it had alone.  (This action is much like some viruses do to our cells.)  A symbiosis resulted in the invaded cells where the mitochondria supplied ATP energy and the invaded cell provided a better means of reproduction and protection.

These symbiotic cells then began to cluster with others of their like forming nuclear membranes along the way.  Earth then had the foundation for complicated, nucleated, multi-celled organisms like humans to exist, with cell energy supplied in the same way that it was by mitochondria two billion years ago.

The hamstring muscle group does a great deal of work to lift a distance runner’s legs during the gait cycle (too much work if the glutes are not firing properly).  There are trillions of muscle contractions done in the hamstrings during each mile run.  Muscle contractions require ATP.  ATP is not stored in the cell but is rapidly converted from a carbon-based storage molecule (fat or glycogen) outside the cell that is then shuttled into the cell as a smaller molecule, like free-fatty acid or glucose.

These molecules find their way to the numerous mitochondria in a human hamstring muscle (and other cells) and the conversion to ATP begins with the rate of production directly dependent on the intensity of the work demand.

Distance running is done at sub-maximum (medium intensity) effort and at a per-minute energy consumption rate, like walking, that best lends itself to ATP production which relies heavily (but not exclusively) on processes that occur in the mitochondria using oxygen as a type of electron transport system.

It takes some time for free-fatty acids or glucose, and oxygen, to be transported across the organelle membrane of the mitochondria and for these molecules to settle onto “workbench” structures within (termed crista), where the mitochondrial enzymes trigger the energy of the carbon molecule bonds to be released and then captured by processes to re-synthesize exhausted ATP molecules.

In contrast, sprinting done at near maximum or maximum effort (high to very high intensity) would not be possible if the energy conversion from fuel to ATP was solely dependent on fuel, oxygen, and mitochondria.

Everything must happen quickly to go fast.  Instead, carbon-based molecules are broken down more quickly outside of the mitochondria in the cytoplasm itself, without the need for oxygen, to release energy for recapture by the ATP re-synthesis process.

Unfortunately, all of these cytoplasm processes cause the presence of different forms of acidity (positive hydrogen ions) to appear which limits metabolism after only a short time.  Humans can run sort of fast to escape danger, but only for a short while before acidity begins to limit the function of enzymes and compromises protein membranes of the cell. 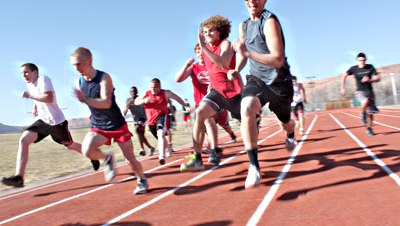 So, humans migrating great distance is low-intensity demand and heavily relies on fuel, aerobic enzymes, oxygen, and mitochondria while sprinting away from a charging cave bear is a high-intensity effort and heavily relies on only fuel and anaerobic enzymes.  This, in a nutshell, is the human genome shaped over the past 250,000 years.  But, how does distance racing and training fit into this scenario?

Distance running is defined as 800 meters through ultra-marathons.  The shorter the race, the more intense it is.  The longer races are increasingly less intense as the race distance lengthens.

Mitochondria will always supply the bulk of energy needed for all distance races, but mile pace is certainly faster than marathon pace so training intensity must often be faster in training for the mile as compared to the work needed for the marathon.

vVO2 max training days are also important to generate a larger stroke volume in the heart and to increase myoglobin in hamstring and soleus muscle cells to hasten oxygen diffusion from capillary blood to muscle cell.

But, to go faster in the shorter distance races means an increasing reliance on ATP produced anaerobically outside of the mitochondria.  This requires more intense work.  While much of the aerobic work is most effectively done using continuous run stimuli, intense and very intense work is best done using intervals and repetition running depending on the training period.