I got on the phone with Kebba Tolbert the other night because I had some questions. We decided to record it.

I had the hour long conversation transcribed and it came out to 24 pages of additional content.

If you haven’t already read my entire interview with Kebba, you can get it here for free.

Today I want to share a chunk of that interview. I think you’ll find it interesting.

It’s about what I call ‘reverse engineering’.

Most courses, certifications, products, etc., are built by and around college and elite level coaches discussing the nearly year round professional and collegiate seasons.

So as high school coaches, we have to digest this information and then ‘reverse engineer’ these 40 week programs written for freaks to fit the content and concepts into, in my case, a 10-13 week high school season.

How do you ‘reverse engineer’ that information? Can you do it? Does it still apply? Would college coaches entirely change their approach if they only had 12 weeks?

I spend more time answering variations of that ‘Can I actually apply this to my situation and, if so, how?’ question more than all others combined.

It’s a fair question. The answer, as always, is:

So I just asked Kebba straight up. Here is the exchange (keep in mind, grammar police, this is a transcription of a conversation not an article or staged interview):

Latif Thomas: So if you only had, say, 12 or 13 weeks from day one to State Championship, would that change your approach to progressing your specific endurance workout routines? If not, why? And if yes, how?

Kebba Tolbert: Yeah. It would change in that you wouldn't have as long for prep cycles. So whereas we have the luxury of having a big general prep, we have two general prep cycles and two special prep cycles and things like that, obviously, with only 13 weeks, that would have to shift because you'd have to truncate things down. You may only have two weeks of general prep, maybe. And maybe you have four weeks of specific prep, so that puts you halfway through your season and the rest you're in true competitive phase. So if I was coaching a 12, 13 week season, then the first few weeks would be part of my special specific prep. I would use them as training. And so those are the types of overall modifications I would make.

Kebba Tolbert: And so you wouldn't do as much specific endurance, but a lot of times, too, in high school, there's two meets a week. And so you can use those meets as specific endurance training. I would think that it's almost ... I think that it's a big mistake not to. So when you're budgeting out, "Okay, we have this much time for this and this much time for that," I was actually having a conversation with a high school coach about this earlier today, that you've got to use your meets to accomplish many of your goals because the intensity of the meet is higher than practice.

Kebba Tolbert: And so your meet might be speed development, so you're doing the 100 and the four by one or the 55 and the 55 hurdles or whatever. You might get some speed and speed endurance and specific endurance, so the 55 hurdles and the 200. So you accomplished something there. You might run the four by one and a four by four on that day. And so depending on what you did in your meet, you got to say, "Okay, what did we accomplish? Now, what else do I need to get done this week?" It might be rest and recovery for the Saturday meet after the Wednesday meet. 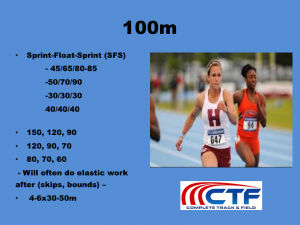 Kebba Tolbert: So if you've got two meets in a week every week, one of the things you might have to do is distribute your quality, so distributed property type of thing. So maybe if every week you're going to do acceleration because that's good, steady diet, like a good multivitamin. So then, you may say, "This week ..." If you have one, two, three, four training days, let's say, Monday, Tuesday, Thursday, Friday, assuming the meets are on Wednesday and Saturday, in week one, you might do acceleration on Monday. You got the meet on Wednesday and the meet on Saturday. Depending on what you do those weeks, then maybe you're not doing any other really true speed and power work that week, maybe. There are some thoughts about how you could do that. Maybe you do it Monday and Friday as part of your pre-meet.

Latif Thomas: So, what coaches want to know is, well, when we have the meets ... when do I get them in shape? If you have Wednesday, Saturday meet, and then the next week you have, say, one meet on Saturday, especially when ... I've heard you say that meets are like super efforts. They're 100 percent plus.

Latif Thomas: So that's going to take a little bit longer to recover from before you can go high intensity.

Latif Thomas: When are we going to get "in shape"? When are we going to "train"? You're saying that even with a 12, 13 week season, you would basically truncate your season into what the meet schedule says as opposed to just, "Well, no. It's cycle two in my college program is just fall training, but cycle two of my high school program, well, now we're full blown mid season, so I'm not going to just treat it like it's college. We're going to treat it like it's special prep because that's what it is."

Kebba Tolbert: So, one answer is ... There's a couple different answers depending on a coach's scenario. So, if you have a gym class at your class and kids can enroll in that, that's one way to start helping them come into the start of official training in better shape than they would be if they didn't do anything. And some coaches will have that option.

Kebba Tolbert: Another option is if you have captains' practices. You have a good leader and they develop good leadership on your team and the captains with some guidance or input run practice for four to six weeks before you officially start, that's another option that I think is responsible. And you've got to give them things that they can do skillfully and not get injured or not get hurt, things like that.

Kebba Tolbert: But even if you don't have those two options, some coaches say, "Well, I can't do that," and that's okay, so then when you start your training, whatever that day is after Thanksgiving or whenever you can start, you've got to start getting in shape then. And from day one to when you're finished you're getting in shape. And that first meet 14 days from your first practice is part of the getting in shape process. And so yeah, you might have to make some hard choices or some things that you might not do if you had a longer time to prepare for your first meet, but if you're going to go to the first meet in 14 days, you might have to introduce block starts earlier than you would like to or even hurdles earlier than you would like to. But you also have to understand, if you go all out really soon in that stuff in practice, you're giving up something later. And so you have to balance that out to me. 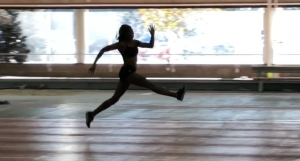 Kebba Tolbert: So I think that's how I would approach it.

Got thoughts? Got questions? Want to learn more? As you'd imagine, Kebba covers it from all angles in the program.

If you have a highly evolved program, you're going to learn new wrinkles to add. If you're a young/inexperienced coach or a distance coach who has been thrust into the role of sprints coach, this will give you a foundation. Bite off what you can chew.

And, as part of your order, you get to ask Kebba as many questions as you want.

That's worth the price of admission all by itself.

But, we still offer a 90 day 'no questions asked', money back guarantee.

If you think it sucks, which I can't image, just ask for a refund.

You have nothing to lose and everything to gain.

Or not. Do your thing, coach. 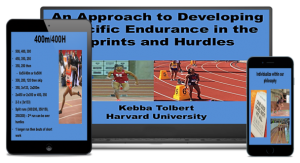 'Specific Endurance Development for Sprints and Hurdles: An Advanced Approach'

Like Loading...
Posted on February 21, 2018 by Latif Thomas in Sprints
Tagged as Kebba Tolbert, Latif Thomas, specific endurance development for sprints and hurdles