Competitive running events between the 800 meters and 10,000 meters have a strong mix of aerobic and anaerobic energy system contribution. The strongest mix occurs in the middle distance events of the 800 and 1600 meters. In order for a middle distance runner to be truly successful they will have to tolerate both a small amount of hydrogen ion build-up over a moderate distance and a large hydrogen ion concentration over a short distance, but at a fast velocity. Scientists and coaches measure the strength of the detrimental acidic hydrogen ion concentration by measuring the more stable portion of the lactic acid molecule: lactate.

At rest, normal lactate concentration is very low in the blood, thus its counterpart acidic hydrogen ion concentration is low as well. The value at rest is less than 1 mmol/L of blood. Jogging does not raise it much, maybe to about 1.5 mmol/L of blood. Eventually though, running becomes fast enough so the lactate concentration gets high enough that it starts to affect bio-chemical reactions in the body. This occurs at about 2.0-2.2 mmol/L in most runners. This point is called the lactate threshold of a runner. It is the point where the body cannot clear lactate from the blood fast enough so it begins to accumulate and really mess with things like enzymes and tissues. The accumulation rate really increases as running gets faster and faster (figure 1). 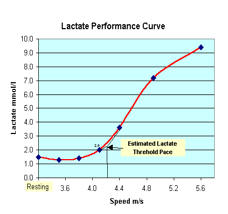 Figure 1. For most casual runners the lactate threshold occurs at 2.0-2.2 mmol/L. In this particular runner, that point correlates with 4.3 meters per second velocity (11 mph).

Middle distance coaches can devise workouts to shift the lactate threshold velocity curve closer to the bottom right of a graph such as figure 1. Lactate threshold directed training will move the 2.0-2.2 mmol/L inflection point shown in figure 1, but most importantly for performance, the hope is to get faster at the same lactate values (figure 2). 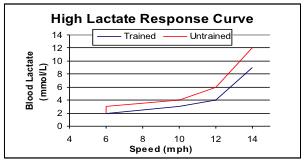 Figure 2. A trained runner accumulates less lactate at all sub-maximal speeds compared to the casual runner, thus shifting to the right side of the graph the lactate threshold.

Lactate threshold runs are basically aerobic workouts that are done a bit faster than the lactate threshold inflection point pace, but over a variety of extended continuous distances. In coach-speak these are called “medium paced days”. Coaches set intensity for these workouts by working off of the tested date pace velocity at VO2 max. Work is done in a range between about 70-89% vVO2 max pace and divided into three training zones (figure 3). The lower portion of the percentage scale calls for longer bouts of work with durations of up to 10-14 miles, and are called Lactate Run 1 efforts. These are faster runs than the standard long runs which are usually done at the aerobic threshold which is just under 70% vVO2 max pace. The higher portion of the percentage scale is where the tempo run can be found, and are called Lactate Run 3 efforts. The duration of work in this zone is at 4-5 miles and done near critical pace which is basically 10 kilometer pace. Lactate run 2 efforts are in between and stretch from 6-9 miles. Coaches can also work off lactate testing of blood during the run if that instrument is available. Protocol calls for a quick prick of the finger and results are known in under a minute so pace adjustments can be made on the fly.

Lactate threshold runs of any of the three varieties should be common for any athlete that is seriously training for an endurance event in track. Middle distance runners should spend most of their training time in this modality in the Lactate Run 3 effort with an occasional try at a quality Lactate Run 2. The Lactate Run 3 workout can be separated into an interval session as well on the track. The work can be as short as repeats of 400 meters and the rest should be very short at between 15-25 seconds. The total distance should be in the 4-5 mile range which will be 16-20 laps.

All distance runners, including middle distance, must right-shift their lactate threshold value if they are to achieve fitness for their event. For 800 meter runners and milers, a lactate threshold run should be done during every training cycle during the season and frequently when not in season.

Race Strategy and Tactics for the Endurance Events: 800m - 5000m