Many college coaches are perplexed with the short amount of time they are able to spend with their athletes during the fall months. Typically, coaches get to work with their sprinters and hurdlers for 6 to 8 hours per week, depending on their conference or other institutional factors. Though this time is limited, it is better than nothing.

The commendable yet wrong idea.

Toward the end of the summer, my inbox is usually flooded with emails from sprint recruits who have decided on running cross country, to get in shape for the indoor season. My initial thought is approval; at least they are staying fit and actively preparing for the year ahead. As a young athlete, I had the same idea and used cross country to jumpstart training for the track season. I did everything “normal” cross country runners did the entire fall. Ahhh… If only I knew what I know now.

If an athlete is on the cross country team at the high school level it’s safe to assume they have to run some 5k races, after all it is indeed called cross country. Besides running longer distances, sprinters are not required to use sprint equipment at practice, such as blocks, sleds or other speed/ resistance gadgets. Most coaches find their top sprinters are not on the varsity cross country squad. Many are simply trying to get in shape and start building an endurance foundation for the indoor season.

I know if I just throw my sprinters in with the distance crew and modify the workouts a bit they will get slower.  As I indicated in the title, long slow running builds long slow sprinters.  Just throwing sprinters into higher volume regiments will also lead to injuries such as shin splints.  In the fall, sprinters can do activities that will prepare them for sprinting while still building a base that will allow them to run some 5k’s. These athletes will not be heading to the cross country state championship, however they should be able to run a 5k from time to time.

So how do we get sprinters prepared for the track season in the fall without breaking any rules, avoiding injury and strengthening their physical and mental bodies, making them ready to compete in several 5k races?

I would do a big active warm up followed by sets of block prerequisites such as push up starts, falling starts, 3 point starts, and crouch starts.  Two to four of each exercise for 10-30m would be appropriate. This will help the athlete feel like they are doing sprint work.  They will feel explosive! These prerequisites will prepare the sprinters to come out of blocks when it is allowed.  Many times I hear coaches say that they only have 12 weeks with their sprinters so time can’t be wasted with these drills.  Well…the perfect time to do these acceleration movements would be in the fall since blocks are not used for competition.  Once the track season starts the blocks can be added into the workouts and the athlete will understand how the body should feel while accelerating from all of the base work done in the fall.

I would start with another active warm up and finish off the warm up with some fast strides. Tuesdays should be all about tempo. For example, broken 600m’s would be a good workout for this tempo oriented training day. Broken 600m’s are completed by running a 200m at 70-75% followed by a 200m at 50% then cranking it back up to 70-75% for the final 200m of the set.  Typically, I will do 1-5 sets of Broken 600m’s with 3-5 minute recovery followed by 2-6 x 150m’s at a faster pace with 3 minutes recovery to get the legs moving again.

If you send your sprinters out on a 30-35 minute run they will most certainly slog.  Not jog, but slog. A matter of fact, sprinters would be more likely to slog to the closest person’s house 5 minutes away then play basketball for 20 minutes and slog back to the track. Sending sprinters out on runs is a waste of time.  These fast twitch kids will find away around doing the work since it is the opposite of what they want to do.  I would try to figure out a way to give them what they want and also what they need at the same time.

After the workout sprinters should do a lift or body weight circuit.  The lifting or circuits should be tempo oriented movements like bench, squat, push ups, etc.… The tempo in lifting for a bench press would be slow and controlled on the way down with the bar and faster on the way up.  There is a tempo to the movements. Again, the lifting or circuits should match up with the running that is being performed. 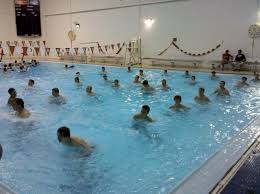 Pool workouts for your sprinters? Yes!

Pool workouts would be a great idea on hump day (What?!?! What?!?!).  This is a great way to do conditioning and get in volume without crushing the sprinter’s body by having them pound the pavement.  Click here to read an article that has more information on pool workouts.  After the pool workout I would have the sprinters do a bunch of core exercises.

I would repeat the active warm up for the sprinters, followed by acceleration movements like block prerequisites or even short hills. As the fall progresses I would want to see the sprinters starting to do some sort of speed or maximum velocity progression using wickets (aka banana hurdles).  After the turn over work I would ask the athletes to do a Jump Run Circuit. To learn more about Jump Run Circuits click here. This type of workout should end with a lift or body weight circuit. On this day, I would try to do a combination of explosive and tempo movements.  I would have the sprinters start with the explosive movements then move onto the tempo oriented movements.

I would have the sprinters do a pre meet with the rest of the team followed by core and mobility circuits.

Race the sprinters when appropriate.  I would not race them a lot, but just enough to make them feel like part of the team.  Race day should be considered their big volume day.  Using the same template as training, the sprinters would complete a short active warm up, followed by a 5k tempo run and partner stretching.

No race?  No problem!  Have the sprinters do a workout similar to the things they would do on a Tuesday minus the lifting.  Body weight and jump circuits would be fine afterward, but I would stay away from a fourth day of lifting at this time of year.

In my opinion, this type of training would better prepare the sprinter for the track season without breaking any rules or risking injury.  The speedsters would feel like sprinters and still participate in cross country.  In my mind, that is a win…win.

Please feel free to follow me on Twitter.  In the fall I will start posting daily workouts.