Most cross country coaches have a top training group within their team, whether they actually label it that way or not.  This group typically consists of about a dozen runners on bigger teams, but maybe just four or five on a smaller team.  These are the runners the head coach keeps the closest eye on.  They are the people coaches monitor for appropriate acute and chronic recovery intervals and timeframes. Work sessions are constructed off of the skill and determination of this group. Today we’ll consider the value of velocity as measured in meters per second (m/s).

The members of the top training group are the heartbeat of the team.  They generally are older, more experienced, and savvy to the rigor of training and racing.  As such, it may be helpful to scheme training, racing tactics, reflect on results, and determine goals differently than the rest of the team.

In cross country running, total time always seem to be the name of the game, even though it is so variable with different training settings and racecourses.  For these reasons, after a while, most experienced runners stop focusing on personal record times and instead fix their attention on whom they are racing in the shoulder to shoulder battles.

This is a good opportunity for coaches to shift their focus as well from split times and total times to a quantitative measure that is more valuable to understanding the dynamics of training specificity and the evaluation of a runner’s success in a workout, time trial, or race.  This mathematical value is velocity as measured in meters per second (m/s).

Because there are numerous calculations to be done frequently to maintain the validity of this number; and in establishing a working discussion comfort level between coach and athlete using these values, it should not be for all runners on the team.  The top training group is the appropriate audience to work with meters/second velocity regularly.

Determining how and when to use average velocity in meters per second is straight-forward with cross country runners.  Table 1 was constructed to accommodate most skilled male high school 5k runners, although it is shown in 15-second increments, and coaches would want exact values for each of their athletes which they will have to individually calculate for.

The table values are determined by taking 5000 meters and then dividing by the total number of seconds used to run the race.  As table 1 indicates, if a racer can average faster than 5.20 m/s in a 5k cross country race then they can break 16:00 for total time.  Let’s say there is a runner that wants to run under 16:40 for 5k, then the average velocity for that race will have to be faster than 5.0 m/s 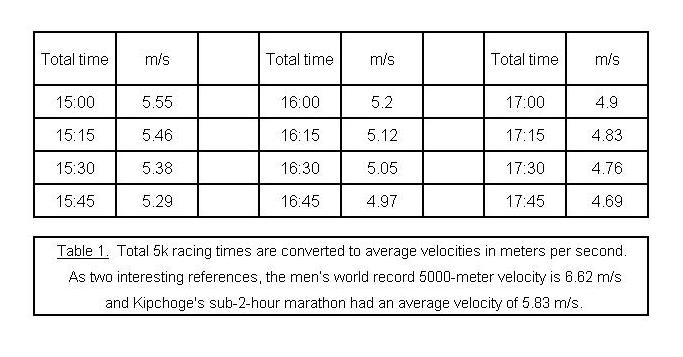 This is the general means for determining a runner’s skill level at the moment in m/s, but how can this value be used to determine individualized workout velocities?

Let’s say Jack is a junior on a high school cross country team and has a 14-week cross country season.  At the end of the sixth week, Jack ran 17:15 for 5k.  That is what Jack is, a runner that can at the moment, average 4.83 m/s in a 5k race to exhaustion.

Jack wants to get faster.  The next 9-day training microcycle that begins coincidently at the start of the seventh week of the season is going to have a mixture of different paces to be done if indeed Jack is going to race faster.

What will this mixture of paces look like?  The 4.83 m/s velocity 5k average is our known date-pace reference mark for Jack.  It is well known that the 5k race is a mixture of aerobic and anaerobic derived energy contribution. While looking holistically, the 5k is much more aerobic than anaerobic, but at this time of the season, Jack needs to be working both aspects of his energy system to stimulate adaptations for faster racing.

Some work during this microcycle needs to be much faster than 4.83 m/s and some of it much slower.  Other work needs to be done just below and just above 4.83 m/s.  Table 2 illustrates a possible specific preparation period microcycle and corresponding velocity values for each of Jack’s eight training sessions and one race. 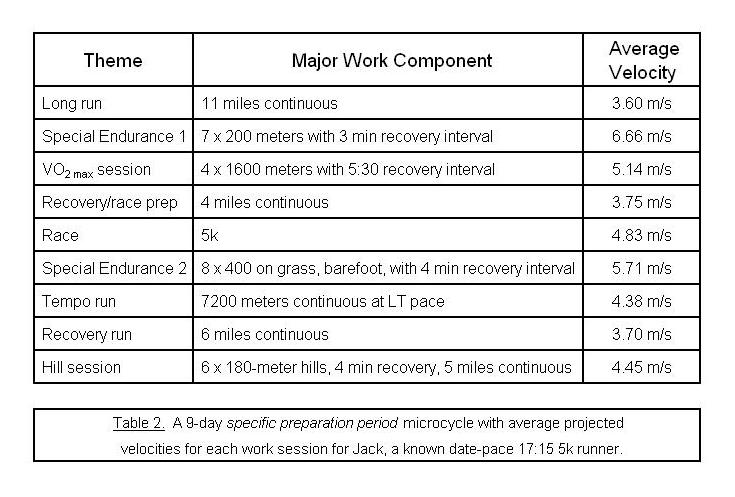 A continuum of stimuli need to be applied.   This is the type of velocity mixture found during the specific preparation period that will drive down Jack’s present-day 4.83 m/s average race velocity.  As Jack runs faster in later races the corresponding workout velocities will drop as well, but there will always be this similar mixture of effort.

Jack probably has a seasonal goal of around 16:35 for 5k.  It might be best for Jack to concentrate on achieving a 5.04 m/s average velocity goal for his races then to worry about his overall end time.

The concept of multi-paced training may ring home with Jack by using the concept of average velocity, and he might just run his workouts thinking about quantitative markers rather than dwelling on an end time.

For Jack’s coach, putting an average velocity to each workout in the different training microcycles allows for a quick study on the spectrum of velocities the prescribed work sessions are addressing.  Are all the key velocities being addressed for the top training group?  Too many runners train at the same velocity nearly every day, only varying the length of the run.


Intensity – Can It Be Too Much In Middle Distance Training?