The 100m and 200m sprint events are more maximally speed related, and measuring / testing maximum velocity improvement year to year can shed some light on actual progress in training that meet performance may not be able to provide.

It is widely accepted that the ultimate test is the competition itself, but when the meet has poor conditions how does one know how things are going? What about injuries and illness? Meets are vital but before one decides to compete, good information is important to have.  Various lengths of max speed sprints, with corresponding run up distances, can help coaches test progress, not necessarily test speed.

When fly sprints are available, usually the athlete is not 100% fresh or prepared for a good performance because some skill is required to artificially capture maximal speed. I have seen some legendary and pedestrian times that have led to great performances and sometimes letdowns without any strong indicator what way the athlete would go.

How to Set-up a Flying Sprint Test

Most sprint coaches understand how to set-up cones and capture a flying sprint, but the devil is in the details. While timing gates and electronic timing is vital, video is extremely useful because mechanics can be seen individually without other competitors being in the way.  Digital video chronometers are nice, 100% accurate, time consuming, and miss the opportunity for live feedback that can create a good training buzz or warn of possible fatigue.

Due to the nature of maximal sprinting being sensitive to fatigue and posing risk of injury to muscle groups, it is imperative to follow the following five instructions. Fly sprints are enormously taxing, and classic mistakes in executing what should be rather clear can hamper getting good timing done with teams or individuals. Here are some very fundamental but timeless suggestions that should be verbally explained firmly to developing sprinters or less experienced trainees:

1. Warm-up Specifically- The most obvious concern when doing fly sprints is not pulling up with a muscle strain, since the sprints are so taxing to the body and pose more risk than other workouts. A good rule of thumb is to add another 15-20 minutes of extra work to fully prepare for the sprints.

Remember that upright running needs to have very specific striking in a tall vertical posture, something that can’t be replicated except for sub-maximal sprints. Doing 2-3 build-ups can serve as an excellent diagnostic to athletes that perhaps need to be tested later in the week, as it’s better to be cautious with maximal speed testing.

2. Run through the line- The most common fault with athletes is slowing down right before the line. The least opportunistic time not to sprint through the line is during fly work. Ditch lengthening the fly distance and stay firm to the philosophy of running through the line.

3. Get tall before the Zone – While 20m and 30m accelerations should allow enough time to naturally rise to a tall posture, many sprinters seem to stay locked in a transition posture in order to gather more speed.

4. Decelerate Gradually- Another common fault is an athlete “putting the breaks on” right after sprinting at top speed. Not only does this risk injury and break down the legs, it misses a priceless opportunity to work on front side mechanics by feather touching the ground and learning to high step. High stepping is not necessarily learning technique, but learning how good technique feels. 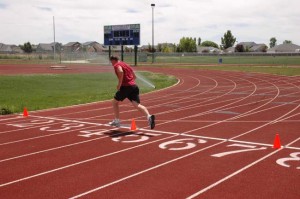 5. Utilize Visual Markers- Coaches need minimal visual markers in order to give reference points of where the flying segment is.  I have found that Winckler Pods (tennis balls cut in half, named after the legendary sprint and hurdles coach Gary Winckler) are good markers to warn athletes of the impeding sprint zone is. By placing a pod every meter 5m in advance of the fly zone, most athletes haven 2-3 steps to get their posture perfectly upright.

I also suggest using a pair of tall cones of about two feet in the back of the zone,  and two one foot cones in the front of the fly zone.

Each fly sprint requires the athlete to accelerate for about 20-30m in order to gather enough speed. The fly zone ranges between 10-30m and the athlete is expected to decelerate additional 20m. A sprint fly can range between 50-80m in length, hence why only a few can be done in practice.

In general, many coaches like to use 20-30m fly sprints because the performances in practice replicate the athlete’s ability to use that speed in an actual 100m or 200m sprint. Many coaches have been burnt by athletes who are “Tarzans” in the flying 10m but perform like “Janes” in the 100m, so it’s important to use the 30m when possible.

Younger athletes may train the flying 10m because they can’t hold a maximal sprint for very long, but timing and analyzing it is excessive.

20m Run-up– The shorter run-up distance should use a standing or high crouch start in order to be at the required vertical posture. Since the shorter distance will not create the same velocity into the fly zone as the 30m option, one must treat the splits as completely separate measures and they can’t be compared directly.  Another noted detail is that the 20m run-up is a safe option for early assessment in the SPP or when weather is not cooperative.

30m Run-up– The longer run-up distance can use any method of starting but advanced athletes need to understand that at 30m the they must be completely tall and vertical, far earlier than when they are actually racing. Using blocks isn’t going to ruin race modeling, but one has to remember that you rehearse a lot of technical habits in practice. I find that a three point start or deep crouch allows for a quicker transition to vertical without imprinting a “pop-up” later in the transition phase to top speed.

10m Fly – I rarely use the 10m fly because I don’t find it a valid length for extrapolating into a competitive distance. It is a good tool to see what younger athletes are able to do mechanically and help with talent identification.  Sometimes with intermediate and advance athletes, this distance places an athlete in a bind that they are “trying to do too much with so little” in terms of time and distance.

20m Fly- Some sprinters find that more reps of the 20m fly help with holding a good sprint posture easier than doing fewer 30m runs. Given the option of having  the shorter run-up, the 20m fly is a great teaching tool as well as testing drop-off rates. The drop-off rate is the how quickly the sprinter decays in power output.

30m Fly- The length of the 30m fly makes this test a very good indicator of what 100m time one is able to achieve when complimented with a 30m acceleration test. Clearly the longer sprint fly is more valid than the two previous shorter options, it still isn’t a predictor of actual 100m and 200m races.

The 200m sprint event requires significant speed endurance qualities and the 100m requires a full execution of all the major phases of the race, making isolated tests limited. Again, the 30m Fly is a good test but it’s limited in predicting what will happen versus what can happen if one has enough speed endurance.

How many Flying Sprints to Test

Assigning specific volumes to fly sprints is not a good idea because fatigue or slight strain can become a major injury. Therefore 2-3 is just a rough guideline to capture times and video. Some athletes with supervision can do more, especially if they are not maximal, but the most common option is to get a good time that identifies where the athlete is on that given day.

The most important factor to look at flying sprints is not just the time, but how the sprint looked and felt. Many times a poor time is accompanied by subjective feelings of being sluggish or flat by the athlete and later opportunities with similar weekly training loads can be given. Stated earlier, flying sprints are good testing tools but paradoxically many coaches find that the slower speed endurance sprints help develop maximal speed because the technique is more stable and a good rhythm allows good relaxation abilities.

Unless one has consistent meet analysis options for evaluating top speed, the sprint fly test is a great evaluator of maximal speed. Coaches can observe practice time relationships using tables, but the most important question to look at is the improvement of the athlete each year.

Carl Valle is a USATF level II Sprints, Hurdles, and Relays Coach who has worked with several olympians and coached athletes at all levels to dozens of school records and conference championships. He blogs for Simplifaster.com and optimizes technology for athlete performance. Freelap is a fully-automated, wireless timing system that can accurately time fly-in sprints, splits, tempo runs, block starts, and more. Freelap is affordable for the individual athlete and expandable for team training.
Related Posts

How to Create an Annual Plan for High School Sprinters

Supplemental Lifts for Athletes and Sprinters