A properly schemed middle distance training macrocyle should be set up to be between fifteen and twenty weeks in length.  For planning purposes the macrocycle is divided into two phases which are called preparation and competitive.  In essence, the first half of the macrocycle focuses on preparation, while the second half focuses on competition.  The two phases are sub-divided into four training periods (two periods in each phase) which are used to plan and implement different types of aerobic and anaerobic training sessions depending on the time of the season.  Here we will discuss planning the middle distance pre-competition period.

The pre-competition period, or pre-comp for short, is the early portion of the competitive phase and is characterized by two important thoughts:

1). meets consist of competitive Invitationals (and other important meets), and
2). a continuation if not an upgrade of the hard work found in the preceding specific prep period.

This time of the season the work is the most difficult of the macrocycle and needs to be done frequently.  The meets during pre-comp have risen in stature over earlier competitions because the athletes are now very fit, but keep in mind it is still a few weeks until the championship meets. 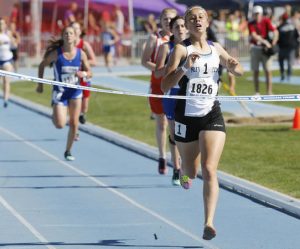 Psychologically, the athletes are the most stressed of the whole season because of the precarious balance of hard work and important meets.

Pre-comp contains the most thoughtful and all-encompassing twelve day training cycles found during the macrocycle, mainly by stressing tough anaerobic workout sessions.  Special endurance 1, special endurance 2, and speed endurance are all necessary training units for a successful middle distance runner, and they are all stressed at this time.

Pre-comp sessions are characterized by high total volume, and moderate recovery periods between work bouts within the session.  By keeping the recovery moderate, usually 3-5 minutes, intensity is maintained due to just enough metabolic and neuro-muscular recovery.  In other words, the runner is pushing high heart rates, and is relatively high on speed and lactate factors, but is not running all-out efforts.

On the aerobic energy side of energy production during pre-comp, total daily running volume reaches its highest level of the season.  Aerobic power workouts are very important at this time and aerobic capacity workouts are characterized by more than just running base miles as is typical of earlier periods.

Frequently, an accurate field test for the runners individual vVO2 max needs to be updated so that aerobic workouts can be prescribed that correlate directly to their date pace.

There is a good chance athletes are running at or near their career best at this time so the field test must be carefully administered and calculated into workout pace.  Improvement in aerobic power conditioning occurs best when it is done very near vVO2 max.

As in all middle distance running it is important that the athlete does not over-race during pre-comp.  Quality and not quantity competition is the emphasis during pre comp.  A race or two over each twelve day microcycle for a total of five races during pre-comp is more than enough to gather the information needed to asses the responses that the athlete is having to the training stimuli.

The more experienced the runner, then the fewer races that are needed.  It is best to schedule races that really psychologically and physically challenge runners during this period.

The training sessions common to each pre-comp microcycle (with session examples) should contain:

The pre-competition period is a time of intensive aerobic and anaerobic energy system development done sequentially so that over-use injuries are kept to a minimum.

The pre-comp training model that is implemented should portray a varied array of complimentary training sessions which adhere strongly to individual development of each runner.