As infant humans proceed through daily activities in an instinctual manner just like all of the other animal species on our planet. However, instinctual behavior beyond the age of 1 or 2 in humans becomes curiously rare. With the largest proportionally-sized brain in the animal kingdom, humans quickly move from instinct to learned behavior early in development. Adult humans mostly behave by analyzing, synthesizing, and evaluating sensory input in the frontal cortex portion of the brain. Synthesis of thought is known to be much more advanced than instinctual trial and error behavior. The behavior of trial and error is controlled by the regions of the mid-brain which are highly developed in the rest of the animals but not in humans. This sort of high-level thinking has allowed humans to control their own destiny, something no other animal can claim. There are two other psychological characteristics linked to frontal cortex synthesis of thought which humans uniquely posses: motivation and self-esteem. These two traits alone may be the reasons humans choose to compete in athletics and develop the desire to be on structured athletic teams, and be happy, successful, and motivated athletes. 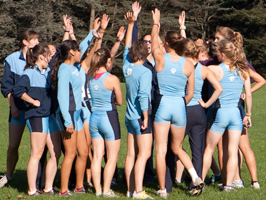 An athletic culture that separates performance from personality has been shown to lead to high levels of motivation and self-esteem in team members.  A cross country team that has an approachable, well-rounded, passionate, and respected leader (coach) who further propagates positive attitudes of motivation and self-esteem is the driver of the cultural attitude of the program. A positive culture chiefly exists because the attitude and the values of the coach have rubbed off on the team members, and the athletes have watched it happen on a consistent basis. This feeling of good about ones-self and their surroundings is how positive self-esteem is defined. Because this feeling is so deep in the human thought process, it is best achieved with frequent intrinsic rewards. That is, by fellow athletes and coaches who show sincere caring, compassion, and gratefulness toward each other on a personal level. That is not to say there will not be criticism of performance if warranted, but self-esteem needs to be linked to personality and not performance. The athletes will learn this that from their leaders.

Sports have always been linked to some type of extrinsic rewards. This propagates positive self-esteem in a different way than intrinsic rewards do. The prospect of earning medals, trophies, ribbons, and other related objects is motivating to the cross country runner. This is especially true for the novice and emerging runners on a team who are trying hard to become a big part of the program.

Extrinsic rewards are more than awards that an athlete may earn. A cross country coach should be constantly selling t-shirts, sweatshirts, and anything else that is hot at the time to team members, parents, alumni, and the general public. Building a unique and cool identity to the cross country team will lead to a positive team culture where everybody is proud to wear the gear around school and town. On the other hand, there are some extrinsic awards that should never be sold, only earned. The team should have guidelines for earning summer training t-shirts, performance sweatshirts, or other beloved and cherished gear. The team should also have a tent, flags, banners and anything else that can be displayed proudly at meet or school function that gives the team members a sense of pride because of others wooing and awing at this extrinsic branding that identifies their team.

A successful coach should invite experts to come in and talk to the team about topics that are best explained by somebody with more expertise in developing the team’s culture. Running shoe representatives, dieticians, podiatrists, and even a policeman to explain running on the roads are good examples. These experts are usually happy to come speak to the team and you make them a part of your team’s culture. Bring in alumni and have them speak about how running and being on the team aided the success that they found later in life. A great idea is to reward your top seven runners with a cooking class at a kitchen store in your town. It is a crazy fun night for the runners and coach! The seven high school runners will learn more about good nutrition and food preparation on that night then anything else a coach can do.

A positive culture embraces the history of its existence. A successful cross country coach must maintain up to date records and yearbooks for every year, including all of the race results and performances on all of the courses. Distribute these to team members as paper copies, and also bring to waiting rooms at doctors, dentists, and veterinarian offices for people to browse through. Email copies to alumni in the team’s data base.

A positive culture has contributions from everybody. Maintain a website and social media with not only up to date race results and meet information but also by requiring team members to write blogs. Select a varsity and a junior varsity runner each week to write a one page blog on some aspect of the team and then post it on social media. In addition, the cross country coach should also write one blog each week on training and how it is being done on the team during that particular week or training microcycle.

Humans are unique animals. Motivation trumps instinct. Without motivation and positive self-esteem there would not be cross country teams. Make the cross country team that you coach part of a positive culture that everybody involved contributes to. A program that has lots of motivated athletes that feel good about themselves and a whole bunch of parents, alumni and everyday citizens that cheer for the team whenever they watch a meet, read about the results, or see your brand.