When trying to make cross country runners faster there are no more important variables than proper posture and the characteristics of foot contact on each stride cycle.  Foot contact times vary with pace in running.  Slow paces show longer foot contact patterns, and increases in velocity show consistent decreases in contact times (Figure 1). 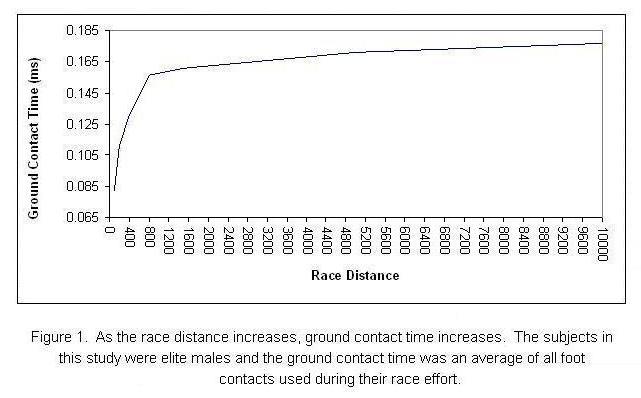 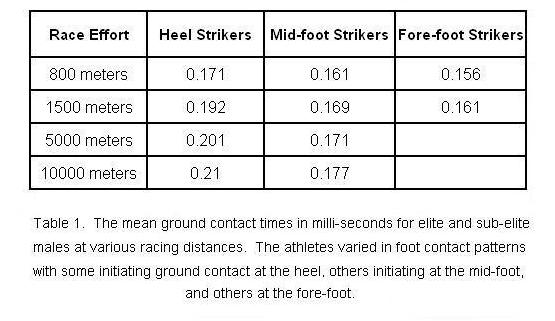 The amplitudes of running movement observed in distance running paces, particularly at the hip joint, vary with velocity, however the degree of hip extension observed remains fairly consistent at all paces.

When preparing for ground contact the lower leg should be pushed straight down directly underneath the center of mass of the athlete.  Coaching cues must be directed to a proper landing and not be focused on the recovery mechanics.

The running stride cycle uses about 70% of the total energy in push-off activities, 20% in recovery mechanics and 10% in gaining stability of the body.

The countering and balancing movements of the upper body vary with distance running pace and influence ground contact characteristics.

Starting, surging, and kicking comprise a small but important component of any endurance event.  Starting requires forceful steps, high amplitudes of movement, large displacement with each step, and a significant forward lean.  Any surge or kick requires subtle mechanical changes of the same type.

Efficient running economy is dependent upon postural integrity.  Postural needs fall into two categories that must be addressed as a runner gains experience:

1. Postural stabilization refers to the stability of the postural unit during the rigor of racing. The head should be held in alignment, although not rigidly. The pelvis, although free to move, should be stabilized within a unique, appropriate range of motion.

2. Postural alignment refers to the alignment of the core of the body, particularly the alignment of the head and pelvis. The head should be in a neutral position with respect to the spine. This position allows for muscle relaxation, stability, uniformity of movement, and vestibular function. The pelvis should be aligned in a neutral position. This position allows for relaxation, freedom of movement, elastic energy production, and stability.

Individual differences displayed by numerous successful distance runners are likely to have little effect on performance. These are stylistic differences, and coaches differentiate them from technique for this reason.

An inefficient running stride cycle is usually rooted in the athlete’s misconceptions of ‘what is right’.  Perceptive misconceptions usually result from improper prior coaching cues or attempts to copy the gait of other performers.