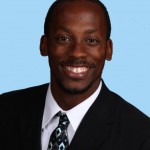 Reuben Jones begins his third year as an assistant track & field coach at Princeton University, specializing in the women’s hurdle, jump and sprint events for the Tigers. During the 2018 season, Jones helped Christina Walter to the second fastest Princeton time ever in the 60m and 200m dashes. He saw the women’s sprinters/hurdlers/jumpers record seven indoor marks and ten outdoor marks that rank within the school’s all-time top 10.

In his first season with the Tigers, Allison Harris jumped Ivy League records in the indoor and outdoor pole vault. Harris won both the indoor and outdoor Ivy Heps pole vault titles and competed in both the Indoor and Outdoor NCAA Championships. He helped Ashley Willingham run a program record in the 300m dash and was a valuable contributor toward Ellie Randolph setting the second furthest indoor long jump mark in school history.

Jones came to Princeton after spreading his wings at Columbia University. During his three years in New York City, his women earned 26 All-Ivy honors in the sprints and jumps including program records in the 60m, 60m hurdles, 100m, 100m hurdles, 400m relay, 800m relay and triple jump. Nadia Eke secured top-4 finishes in the triple jump at the 2015 Indoor and Outdoor Championships while on her way to setting a national record for Ghana.

In 2013, Marvellous Iheukwumere became the first woman since 2006 to win the indoor and outdoor Ivy Heps sprint quadruple (60m, indoor 200m, 100m, outdoor 200m champion). Eke and Iheukwumere were both all-time Ivy record holders during their careers at Columbia.

Prior to the Ivy League, Jones spent the 2009-2010 season as an assistant track & field coach at Coastal Carolina University. The Chanticleers set two Big South conference records and won five indoor as well as five outdoor Big South titles. His time at Coastal Carolina came on the heels of being a volunteer assistant coach at his alma mater, the University of Virginia, from 2008-2009. In his first and only year with the Cavaliers, the men tied for first at the 2009 Outdoor ACC Championships – the first men’s team title in Virginia track history. Jones assisted with recruiting, daily workout scheduling, and managing meets. Jones graduated from the University of Virginia in 2008 with a bachelor’s degree in sociology. He still holds the second fastest 60m and 100m times in school history.