“When you free yourself from volume concerns, the picture becomes much clearer.”    – Vince Anderson (Texas A&M)

==> Click here to read Part I: Training Deeper in the Same Pool

I heard Vince say this at the first USTFCCCA Event Specialist School back in 2011 and it blew. my. fricken. mind. Volume as the constant was dead.

When it comes to planning workouts for high school sprinters, especially 200/300/400 types, too many coaches still default to a volume-centric approach. Instead of thinking about the meet preparedness of their athletes as a function of the amount of volume they could handle, I was able to flip the script and focus on what actually makes kids faster.

It’s not that volume doesn’t matter. It’s just not the concern. Like, you can be A nice guy. But, you never want to be THE nice guy. If your default for training long sprinters is to follow a Monday neural session with extensive tempo and your modus operandi centers on steadily increasing the volume of non-specific work (200s at 70% for example), then you’re a volume based coach. And I hope to move you to the right side of history.

“It’s not a matter of volume, it’s a matter of mastering your training program.”   – Vince Anderson

Mastering your training program means understanding all the variables involved in your particular situation and focusing on the 20% of factors that lead to 80% of results. What matters is setting your long sprinters up to run a (relatively) small number of races over the course of several hours. (If it’s a high school invitational, plan for 10 hours because they’re not meant to be high quality track and field competitions. They’re basically cash grabs for whoever is cashing your entry check.) Develop the specific qualities in your long sprinters that will allow them to handle the specific demands of the scenario they’ll face when everything is on the line.

Here’s what I mean:

Now that’s a long ass day. (I only put them through that grinder one time.) They couldn’t walk right for three days, let alone practice. That said, they don’t go bananas like that if their base was built on a foundation of ‘fitness’ or how many intervals/reps they could handle. They ran those times and kept getting faster all day, culminating with personal best splits in the 400 after four and five, respectively, State Championship level races because they had a base of what matters: speed, strength, and power.

In terms of this article, I want to go race pace or faster as often as possible. Booty Lock Tuesday may be intermediate intensity work, but that goal does not change. Additionally, they need to be able to eat lactate. And then when they’re full, I’m going to shove more lactate down their throats and tell them to keep eating. So I’m coming back from a speed day on Monday with a grind workout.

When you free yourself from volume concerns, your focus shifts to what matters because it’s what gets results:

Training at or progressing toward race pace (to me that means 1st 200 target time, not average velocity) meters per second is the focus of our “Booty Lock” (Lactacid Capacity [LCAP]) workouts. Now, I don’t like to be a slave to terminology or percentages, but I’ll give you some so we’re all speaking the same language. For me, I serve Booty Lock work in two flavors: 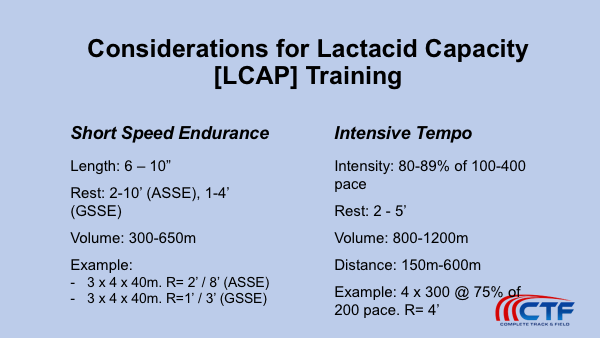 In this article I’m only covering intensive tempo(ish) runs. I use Glycolytic Short Speed Endurance [GSSE] with both short and long sprinters. That’s what short sprinters might be doing today if not going deeper in the same pool or shallower in the same pool. But you can’t do repeat 200s outside during the New England winter. So it’s an alternative to intensive tempo if you’re stuck in the hallways, when it’s later in the season and you’re not doing intensive tempo anymore or when you just want to go faster than middle intensity runs allow for.

Here are three common workouts I use:

You probably want to know the percentages. Couldn’t really tell you. It doesn’t really matter. Because I begin with the end in mind. Start with the desired or required intensity and then the percentage emerges as a byproduct telling me whether or not I’m coloring between the lines (challenging the appropriate energy system and therefore eliciting the desired physiological response).

Program mastery is keeping stats, data, and records so you know how fast they need to run in practice to ensure (as much as you can ensure anything) they’re able to turn in a Championship Performance when it matters. You shouldn’t be reinventing the wheel or starting over every season. What really gives me the most useful information about the shape they’re in and how I may or may not need to modify volume, intensity, and density is their progress leveling up through…

The 5 Stages of Training Maturity

I stole this from Vince Anderson. Every single word of it A to Z, top to bottom, soup to nuts. And I love it. Here is how Vince describes the levels of his system for categorizing the quality of Lactacid Capacity [LCAP] workouts:

Build your lactacid capacity [LCAP] workouts around this model.

As you can see, the goal isn’t to handle more volume, it’s to run faster. To ‘cut down’ their times in the workouts. Also, I use 5x200 instead of 6x200 because my kids aren't going to Texas A&M.

With the 5x200 workout, utilizing a goal pace of 30.0 is a good starting point because it's a form of race pace and if we can't get there, we're not going anywhere. Since I can't have wild fluctuations between efforts, I give them a two second window. So I begin with a goal hitting between 30.0-32.0. That would be a Level II performance. A good sign if it’s early in the season and I didn’t waste multiple practices because I screwed up their times.

But, what if they can’t even get to Level 1? I’m not going to slow them down and have them run 33-35 because that’s trash. So I’m going to remediate the activity until I think they can finish the Big Kid workout. That’s Goal #1 for anyone with aspirations of getting on The Relay, earning individual attention or being invited to Elite Group Practice on Saturday.

So what does this all look like on paper? Let's say that yesterday (Monday), the entire sprints group did the Monday top end speed / max velocity workout from Part II: Training Shallower in the Same Pool. 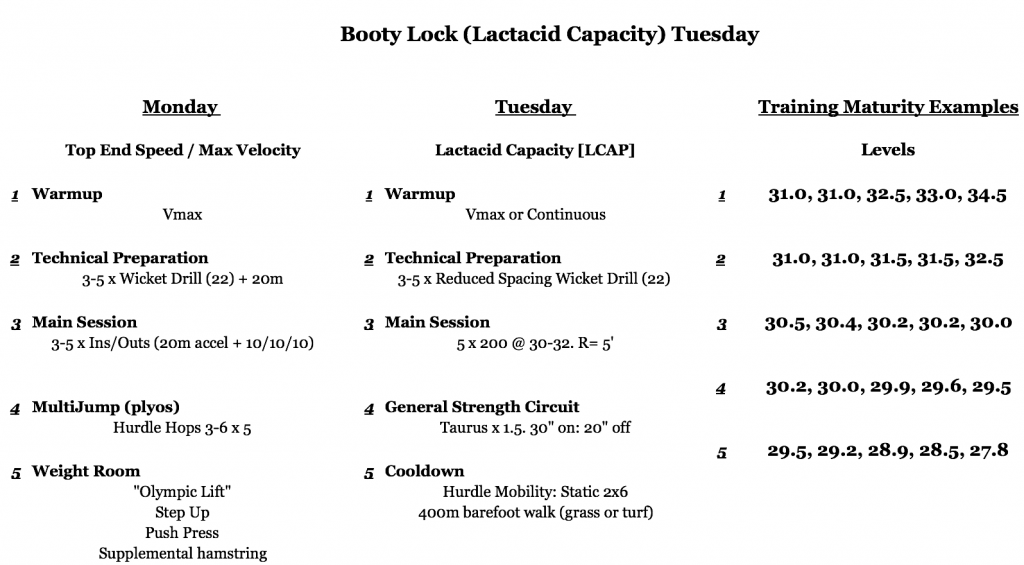 In the long sprints, especially the 300 and 400, each 100m segment requires continually increasing effort just to maintain the same pace. Running 31.0 on the first effort will not be difficult. Running 31.0 on the fifth effort may feel like a full out sprint for the entire 200m. We need to train athletes to increase their effort over time. Cut downs teaches them how to feel this. I tell kids they can run any time they want on the first rep as long as it is within the window. BUT, they're told, don't shame your family by getting slower in subsequent efforts. Maintain or cut down. You don't get points for being a hero on the first two runs when you crap your pants in the last two and then go puke.

When looking at the training level examples, compare each rep within the workout to it's corresponding effort in each level progression. It will quickly become apparent that intensity is the difference that makes the difference, not volume. More 200s at a slower pace won't get anyone from Level 1 to Level 5. Track meets aren't Crossfit competitions. Success comes from getting from Point A to Point B in the least amount of time. You don't win at chess by playing checkers. You don't run fast 200, 300, and 400 times by running high volumes of slow intervals with no specific value to the demands of the actual events.

It's pretty important to get reasonably accurate times which can be fairly difficult if you're running a large number of kids through the workout and you're not staffed like the football team or one of the big schools. Here are a few thoughts/ideas/suggestions:

Hopefully this article gave you a few ideas for how to successfully approach your booty lock / lactacid capacity workouts. Use VA's 5 Stages of Training Maturity. It's extremely helpful for you and your athletes.

If you missed the first two parts of this series, you can check them out here:

Part I: Training Deeper in the Same Pool

If you liked this article, please share it with your friends and colleagues!