Are the cross country runners on your team getting better each day, or are they just getting tired each day?  It is surely not the same thing.  Lots of different workouts will leave even the fittest distance runner tired and exhausted, but was it a proper stimulus for the time of the season?  Today we will consider strength work vs. intensive work when training cross country athletes.

Oh, how easy setting up workouts would be if fitness gains precisely followed a linear curve of development.  It is because distance development is so non-linear that it needs to be broken down into the four periods of macrocycle periodization: general prep, specific prep, pre-comp, and comp.  The former two periods are generally characterized by training that can best be described as strength training and the latter two periods described as intensive training.  There is a proper time and place for both, but many coaches become enamored with doing workouts one way or the other and carrying it through for the entire cross country season.

Cross country runners usually have a lengthy general preparation period; it is why they run all summer.  For most coaches, summer training can be described in one word: mileage.  And, hopefully lots of it.  Running many miles builds strength (and better running economy) through the physical action of trying to maintain proper posture and running mechanics over so much time.  This is very important in a distance runners development and scientists and coaches label this as endurance: the ability to withstand increasing fatigue without performance deterioration.

Most successful cross country programs have some pace variation associated with summer training, but usually nothing that approaches what might be called highly intense work.  If a high heart rate is desired for some summer days, coaches generally move their runners to the hills for some repetitive strength work fighting gravity.  Hill work is characterized by high heart rate and high force production, but not much speed. 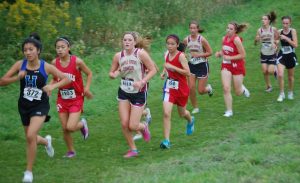 Once the real cross country season starts most programs maintain a higher mileage scenario for a while with some days dedicated to hills, similar to summer training. This helps bring new people into the program and assists in a more rapid team formation, all the while continuing to improve strength in the runners.

Soon thereafter, interval training is added to the workout schemes.  Because intervals are added during late general prep and the early part of specific prep, the recovery period between repetitions is kept short to continue the strength work theme.  Generally, the recovery interval is less than two minutes and typically is 60-90 seconds.

Again, the athletes are getting very tired because there is a lot of work here, and not much recovery.  This is the essence of strength training in cross country runners and is the bread and butter workout scheme throughout the last two-thirds of the preparation phase (general prep and specific prep periods).

Despite how valuable strength work is to a cross country runner, it needs to be de-emphasized during the pre-comp and comp periods.  The training focus needs to shift to more intensive work to get the runner faster, especially in preparing the cross country runners for the critical zone of championship races.

The change in workout sessions is not extreme, in fact it is quite subtle.  The total amount of work done in an interval session is reduced somewhat, but the real change is in the recovery interval.  During the pre-competitive period, recovery increases by 100%-150% of that found in the preparation phase, and during the competitive period the recovery interval is typically 500%-700% more than found early in the season.

These intensive workouts will be much faster compared to the strength workouts because the recovery interval is longer.  These workouts will stimulate all sorts of lactate tolerance responses and adaptations in cross country runners and will spur an increase in anaerobic enzymes before the championship races.  The same response and adaptation would not be there if strength work intervals and high mileage continuous runs had continued all season.

A very nice rule of thumb in coaching cross country runners is this: over the last eight weeks of the season, pick out six days where the cross country runners will do workouts that one might typically find for milers in the spring.  Workouts that are hard and fast with enough recovery to keep coming back hard and fast throughout the session.  Workouts like that prepare runners for the 5k race that is characteristically 8% anaerobic, with a critical zone that could stretch over the last 1000 meters, and just might include a mad 100 meter dash to the chute for the victory.