In the wake of Hurricane Irene one of our volunteer assistant coaches asked me how I thought those 60-70mph winds that this storm created would help a sprinter in the 100m. We all know that a tailwind helps in a race.  However…he 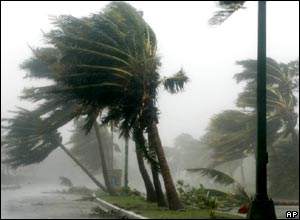 was amazed that I answered by saying that it all depended on an athlete’s sprint mechanics or the ability to maintain sprint mechanics at higher velocities.  I went on to explain that athletes that can maintain mechanics better with any type of a tailwind will get more benefits than an athlete who starts to break down.  I also explained that athletes that breakdown easily at higher velocities start to have negative effects (even though they are running faster because of the tail wind) and do not reap all of the benefits that an athlete would have that can maintain their sprint mechanics.  The athlete that starts to breakdown at high velocities has a double negative. Unlike in math this does not equal a positive.

This simple question transformed into a bigger conversation about the importance of teaching good sprint mechanics in the maximum velocity and deceleration phases of a race. While sprinting I ask the athletes to become a “straight stick”. Sprinters who “stay tall” while sprinting gets all of the force back that they put into the track.  Athletes who collapse at the ankles, knees, or hip lose a lot of the force that they put into the track.  I tell these athletes they suffer from being a “broken stick”. A lot of times I will take a broom stick or another type of wooden dowel and throw it directly into the ground. The athlete will see that the stick bounces off the ground with an equal force that was applied.  The harder you throw the stick into the ground the more it pops off the ground. I also ask them to think about what would happen if there was a bend or a hinge in the stick.  Most of them understand that a bent or hinged stick would not pop off the ground so well. I constantly reinforce that they all need to stay tall while sprinting.

How to Build the Perfect 100m Sprinter from Start to Finish

Some cues that I use for body position include:

After I teach body position in a stationary position we move on to motor cues to use after the athletes truly understand the position their body is supposed to be in while sprinting. I usually start by teaching the athlete the “Hard Z” position.  This position requires the foot and thigh to be parallel to the ground with their toes under the knee and the heel under the hip or upper hamstring.  After each athlete understands this position I usually teach heel up then push down.  I don’t think it is realistic to teach heel up, knee up, toe up, then push down.  There is not enough time to think about all of that information.

Next, I move on to the arms.  I teach the proper range of motion of the arms while sprinting.  The arms stroke from the shoulders. Arms are used to counterbalance and loosely mimic the movements of the legs. The arm stroke is a downward movement that will cause the angle of the elbow to open and the arms to swing backward. The backward swing will cause a stretch across the shoulders and chest, which will assist in the arms movement forward. On the front side the arm angle will close to about 60 degrees. As the arm strokes down, it will open up to 140 degrees as it passes the hip, and it will reflex to a backside angle of about 60 degrees. The cue I use for arm stroke is “cheek to cheek”.

Drills I use to reinforce good sprint mechanics include:

All of these drills correlate to great running posture as long as they are taught correctly.  It is also crucial that the athletes take these drills seriously. If they get sloppy with the drill so won’t their mechanics while sprinting.

After our volunteer assistant and I spoke about all of the body positions and coaching cues I decided to bring it all back to his original question. Now our volunteer assistant understood how a tailwind can help you or REALLY help you depending on your ability to maintain sprint mechanics.  I also started to talk about when it was a good time to address these things in practice.

Most of our athletes want to break out the bungee for “over speed” training during week one.  Well…that would be stupid.  The bungee or towing mechanism is used to simulate running at higher velocities.  Velocities an athlete may hit while “peaking” or with a wind at their back.  This is not something an athlete should work on until they look good at a slower pace and their current maximum velocities. If you try to tow and athlete that has inappropriate sprint mechanics they will start to use braking mechanics because their brain innately tells them to stop or slow down.  This is not something that you want to reinforce with young athletes. Most of my sprinters do not get to use the bungee or any other type of towing mechanism during their first year.  They are not ready.  Using these types of apparatuses is something that is earned for having great form and maintaining perfect body positions at all speeds.  If you can’t maintain great body positions at 70, 80, 90, or 100% then why would you be able to do it at higher speeds?

It is funny that a simple question about a windy day brought about this topic. I always look for teachable moments with my athletes.   Maybe this was a teachable moment for our volunteer assistant coach.