There was a time in high school sports when the only thing that really mattered was what happened during the season.  For better or worse, that time has come and gone for many high school distance runners.  Most good runners have found that simply running 500 miles during the cross country season is not enough to achieve success outside of their own school and by including the whole year in their training program they can make some real progress.  Today we will consider the foundation of the cross country running program.

This is nothing against two and three sport athletes.  In most cases, during this age of specialization in high school sports, distance coaches have been very accommodating to the concept of multiple sport participation.  Unfortunately, that accommodation is seldom returned by the coaches of team sports.  The athletes are seeing this daily.  Good runners move on and want more out of their own running, and see greater involvement as the answer.

Most states have some restrictions as to out of season coaching and team activities.  The level of these restrictions varies widely.  The level of commitment outside of the season by coaches also varies considerably.  Some see the season, others see the year.  None of this prevents a certain guidance by a coach to an aggressive, developing distance runner who yearns to be faster.

It may simply be a month long training program handed to the athlete to follow on their own, or it could be full blown summer practices six days per week with the coach.  Whatever the level, this interaction helps set the ground rules for the distance running culture in a school and will ultimately control the destiny of the cross country program.

The foundation of a distance running program has three units: the cross country season, the track season and out of season running.  What an athlete and coach put into each of these three separate, yet connected units, should determine the ultimate goals for the athlete and the team.

By just running the cross country season each fall, one can expect an athlete to always be starting over from the beginning.  Progress from year to year will be minimal.  That does not mean they should not come out, it is just that goals should be highly tempered and it should be made clear to them that improvement will be slight. 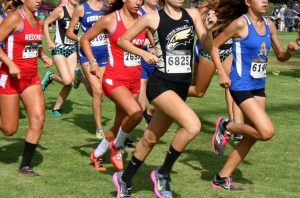 All high school teams have athletes like this and they are valued as individuals, but they should not be how the training program is constructed or direct the formation of team culture.  They are there because of social reasons and it is fun for them. Let it be fun, while the training program sets up around the serious runners.

A serious runner needs to run both cross country and track.  The additional miles run during the track season help develop cross country runners to a much higher degree.  Plus, all of the additional competitions help hone the racing skills of a runner.

The training during the track season is much different than the training used during cross country.  Generally, the track training units consist of work that is shorter and more intense, and greatly enhances the athletes anaerobic power.  Foot-speed improves and running mechanics clean up when a runner runs fast.  That development carries right into the cross country season.

The danger with track is racing too much for a distance runner.  A culture of training importance rather than racing importance is desired.  Good races follow quality training and not the other way around.  The very best scenario is when the cross country coach has complete control of the track distance runners as well.  That situation enhances the continuity of training and absolutely limits spring competitions.

One never finds those dreaded, march through the distance cemetery, 1600 meter and 3200 meter double races in a single meet if the distance coach has control.  Limiting competitions in track not only helps a distance runner improve, it also creates lots of racing opportunities for other runners on the team.

Physiologists advise that high school age distance runners should set aside about 10% of the calendar year for no running.  This will allow time for young bones and muscles to repair themselves, energy to be re-directed to growth and maturation, and for young minds to relax from the rigor of training.  That is about six weeks per year.

As mentioned earlier, one of the foundational pieces of a successful running program is coach-directed off season running.  Again, taking into account the rules of each state, a coach must develop a means for structuring almost daily off season running.  It may be a computer program that athletes and coaches log into (there are several on the market), it may be a written plan that the captains and team follow, or it may be face to face contact.

Whatever it is in each situation, it must be consistent with the goals of the individuals and the culture of the distance team.  It needs to contain both fun activities and very hard work.  It should contain unique opportunities and interesting workouts that will get runners out the door each day despite the off season.  The runners need to feel the vested interest the coach shares with the athlete in their running improvement.

It also needs to be long term, and not something thrown together to be just a two or three week lead-in to the season.  For many good teams it is a week long summer training trip to the mountains or something similar. For others, it may be meeting and running at different geographical areas of their area of the state or city.  Different, interesting, and hard work must be the cornerstone themes.

Cross country running has grown from an obscure high school sport into something pretty special in my lifetime.  About 20 million people walk out of the door and run nearly every day in this country.  Among those vast number of people should be the high school runners from your team.  However, there is a difference between adults going out running each morning, and most high school runners.  That difference lies in an adult making a personal decision to help themselves stay fit and high school runners going out because of a coach, their teammates, or the distance culture that guides them in their program.