The human foot is designed to only do two things, propel the body forward and absorb the shock of doing so.  The center of mass of the body must balance itself on a broad, saddle-shaped pelvis that distributes the weight of the organism equally on either side of the sagittal plane straight down to the foot.  The arms are used to balance the mass of the body during the three phases of the bipedal stride: support, flight, and strike.  Balance, which is a neurological activity, is achieved at various movement speeds by correlating an individuals’ stride length with their stride frequency.

There is a natural harmony of these two characteristics in everyone, and marked improvement can occur in both, with what we call “training”.

In regard to athletic skill development, training is achieved through exercise, which physiologists define as a voluntary change in body homeostasis. Bipedality has freed the arms to help in this balance, at the expense of lost horizontal speed, and it has also created adaptive possibilities that need to be addressed to regain some of this lost quadrapedal speed.

Horizontal velocity in all animals is linked to a robust stride length.  The average sized colt of Kentucky Derby quality has a stride length of 24.6 feet (Sanders, 2006).  Secretariat, one of the best thoroughbreds of all time, had a stride length that measured 24.8 feet.  Bernardini, who won the 2006 Preakness Stakes, the middle-jewel of the Triple Crown, checked in at 26.5 feet, literally off the charts (Sanders, 2006).  Stride length in horses may indeed be the most crucial component of speed.

Therefore, because a horse breathes in synch with its stride – inhaling as its front legs reach forward and exhaling as its lead leg strikes the ground – a longer gait means a deeper breath.  This increases the capacity for more oxygen intake, thus more work capable of being done. This is fine for quadrupeds, but does this hold true for bipeds as well?

As an animal like a horse, or even a human become more efficient through training, running economy improves.  It is easily seen in thoroughbred horses by watching the movement of their tail: no side to side swishing, or wasted up and down motion, nothing to indicate lack of straight-forward, efficient movement.

The human body creates its own combination of stride length and stride frequency to achieve its desired velocity.  It has been shown in high-speed motion analysis studies that too much time in the air, as well as too much time on the ground hinder velocity at all speeds.  Time on the ground is regulated by stride rate.  Time in the air is regulated by stride length.  Studies by Dr Ralph Mann (USATF High Performance, 2006) have show that for both sprinters and distance runners, reducing contact time, thus improving stride rate, is the key to improving performance. 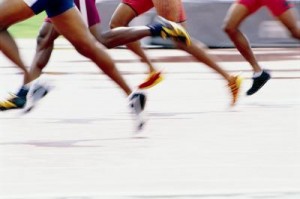 For a distance runner to reduce contact time by .02 seconds per stride would lead to marked improvement in all distances. It has been shown that .02 seconds is about what can be seen by the naked eye without any visual aid like a camera.

An elite distance runner takes about 500 strides per kilometer at race speed.  Doing a little mathematics shows that if indeed ground contact time could be reduced by .02 seconds/stride, this would improve performance by about 10 seconds per kilometer, or better yet, how about 50 seconds over a 5 kilometer race!

It would be much easier to improve by .02 seconds over .153 seconds than it would be over .087 seconds.  It is painstakingly difficult to cut much time in the 100 meter race by an athlete of any ability.  The major means of biomechanically achieving this reduction is to shorten the stride, thus reducing the braking forces inherent to the body.  For example, stride length in the 100 meter race is shorter then the 400 meter race (Mann, 2006).  The faster rate, not a longer length is what achieves maximum velocity.

This is not true in our racehorse, but it is true for humans.   Studies have also shown that as the runner shifts from sprinting to distance racing, there is a shift from power to economy, and the stride will open up to achieve this change (Mann, 2006).  This inevitably leads to some braking forces in distance running that are not present in the 100 meters  because the angle of the foot at impact.  Plantar-flexion of the foot in distance runners is much more common than in sprinters; but through drills like straight-leg bounding some improvement in dorsa-flexion can be achieved.

Identification of proper stride length to minimize these braking forces is a coaching demand.  Front-side mechanical improvement is essential.  This can be achieved through core strength improvement, joint mobility increases, and drills designed to improve balance and stability such as lunges, craning, and limited bounding (Mann, 2006).

Distance runners need to learn active recovery after foot take-off or the backside extends too far which leads to the plantar-flexion problem.  If this happens, the trunk will lean too far forward and the arms will extend in order to achieve balance.  This will create too much time in the air.  As distance runners do maximum velocity work, like flying 30 meter repeats, they will learn to move their weight further up the foot, thus helping to reduce ground contact time, breaking forces and over-striding.

Positioning of the trunk to achieve balance is also a skill.  Leaning back too far does not allow for extension of the lead foot and will create under-striding (Mann, 2006).  Again, max velocity work will naturally improve this posture as the sensory input tries to balance the organism at higher speeds.

The real coaching key may be the use of extensive bare-foot running on grass surface.  This type of physical demand will promote hypertrophy in the many foot muscles, as well as greater dexterity in the Achilles tendon, and create a stronger push-off leaving the ground. (Johnson, 1990, 2006)  It will create a quick, efficient stride pattern that if developed will not tire as quickly.

The action of the arms to help regulate distance running speed and economy cannot be understated.  The arms do not remain at the same angle throughout the stride-cycle; the angle opens and closes above and below 90 degrees.  Because plantar-flexion in distance runners is so common, so is over-striding, and because of this the arms are carried too high.

This can easily be detected by observing the arms crossing high over the front-side sagittal plane.  This indicates too much rotation of that big saddle shaped pelvis.  Getting the arms to remain in the proper position may be as easy as telling the athlete to rotate their wrists 90 degrees so the thumb is pointed up, or as difficult as building much more core strength to straighten the posture.  Merely telling runners to “drop their arms” usually will not be the key to the riddle.

In essence, since speed is the deciding factor in races of any length, the desired body position during endurance running is similar to the desired position in sprinting.  The athlete wants to stabilize the pelvis in an optimum position that allows:  1) an efficient application of force to the ground by the hamstrings and gluteus maximus, and 2) an efficient leg recovery by the hip flexors (Seagrave, 2002).  Forward trunk lean, pelvic stabilization and hip flexibility are all interrelated and have the biggest influence on stride length (Faccioni, 2004).

Hip rotation is required to maximize stride length, but if excessive, then poor technique will result.  If these are combined with poor pelvic tilt, then major inefficiencies will result, leading to either poor performances, injuries, or both.  Forward trunk lean often occurs as compensation for a lack of hip mobility.  Thus, an increase in hip flexibility through dynamic drill work can often lead to a more vertical, energy efficient and quicker running style (Martin, 2002).

A progressive and ambitious training plan for improving a distance runners stride length and stride rate would include the following:

The means for achieving these goals would be sessions of maximum speed work of 50 meters or less, sessions of barefoot running at 60 to 150 meters, walking lunges of 30 meters, bounding of 40 meters, using both straight-leg and bent-leg techniques, and extensive core strengthening static exercises.  These should be designed around ones available facilities, time, and motivational desire of the athlete and coach.

Stride length will forever be linked to stride rate in understanding human movement.  One is not more important than the other, but improvements in stride rate lead to development of optimum stride length.

The reverse is not always true.  Speed is the great determiner in every event in track and field and long distance running.  True speed work is 60 meters or less, anything longer than that is some type of endurance workload.

True speed work is the big rock in any athlete’s bucket, including distance runners.  Speed is not something to be just kept in the drawer and pulled out as needed.  Horizontal speed for an animal our size is very poor, but we can improve it.  It is just the drawback to being upright.  Freeing the arms has been great for athletes.  We can hit a baseball over 500 feet, we can grip a pole and vault over 20 feet, and we can swing an ice-axe and scale the ice of Mount Everest, but we still cannot beat little Rover to the finish line.