Athletes, coaches, and scientists have long known that meal timing affects distance running performance. Knowing when to eat before a cross country race is vital as going for a long intense run with a stomach full of food can lead to anything from discomfort to all out vomiting.

On the other hand, going for a long or intense run on an empty stomach has its issues as well. The available carbohydrate in the blood may have fallen below normal and there may not be enough readily available fuel for the workout.

Sleep is considered a fasting period.  When a cross country runner trains or competes in the morning it means that the activity is following a somewhat prolonged fasting period for the body.  Native blood glucose is relatively low following a fast, so that substrate will supply little energy for the activity.  Native blood glucose is the preferred energy source for the first 4-5 minutes of a cross country race so a high pre-race level is desired.

The vast majority of energy needed for the run or race will come from glycogen stored both in the muscles and in the liver.  The proportion of stored glycogen is about two-thirds in the former and one-third in the latter.  However, liver glycogen will only replenish itself during deep sleep cycles, so there is a chance that if the athlete did not sleep well the night before the race there could be stored glycogen issues.

There is also stored body fat in adipocytes that can supply huge amounts of energy for muscle contractions, however there are issues here as well.  Accessing this fat requires extra metabolic steps to become available as energy, which makes it a relatively inefficient fuel source during times of intense running.

Related Article: The 3 Most Important “Fuels” For Successful Distance Running

The cross country runners’ ability to shift to different fuel substrates to maintain the intensity rates of muscle contractions needed to meet a strong pace is genetically controlled and strongly influenced by types of training stimuli.  Multiple genes behave differently, depending on whether the runner has eaten recently and when.

Many of these genes produce signaling proteins that can improve blood glucose regulation and insulin levels throughout the body and are associated with an improved energy system metabolism using stored carbohydrates either aerobically or anaerobically.

These genes have been found to be most active when the fasting period begins around four hours before intense exercise, but less active when eating was either to close or far from the activity.  A fast beginning farther out than six hours from an activity brings a different gene signaling sequence that involves the use of fat as the primary energy source.  That is fine for everyday activities or a long slow run, but energy derived from fat is rather insignificant in races of 5-8 kilometers.

Eating about 500 Calories of carbohydrate approximately four hours before a cross country race serves to both properly activate gene signaling for carbohydrate reduction, and is far enough out from the activity to have digestion completed in the time period.

Enzymes, hormones and other signaling proteins should have the activity level at optimum, and a high percentage level of blood glucose, to effectively race from start to finish.

How about continuing a small amount of carbohydrate (CHO) feeding with nibbles off a sport bar or sips of sport drink in the four hour period from the 500 Calorie meal to the race start?  As stated before, an optimum blood glucose level is desired to begin a cross country race.  When the runner gets inside of one hour to the start of the activity, complete carbohydrate feeding should stop and only water should be drunk from that point in.

Figure 1, below, indicates the difference in blood glucose percentage levels between ingesting carbohydrates within one hour (20 minutes to digest + 40 minutes of blood glucose monitoring) of the activity or only consuming water. 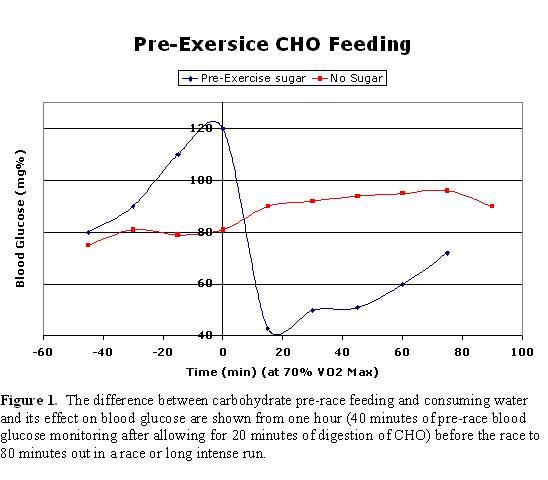 Consuming water rather than CHO feeding in the one hour before a cross country race is recommended in order to maintain a consistent and high level of between 90%-95% saturation of blood glucose during the activity.  This is assuming a 500 Calorie carbohydrate meal was consumed about fours hours out from the activity in order to have the proper starting level of blood glucose of about 80% of CHO saturation.