Developing a ‘speed reserve’ through a well designed speed development program is essential to success in any sport where combating fatigue is a requirement for success. Though we look at this term primarily when discussing track and field sprints, it’s applications apply to a range of sports. Speed reserve is, essentially, the difference between an athlete’s maximum speed and their maximum aerobic speed.

In many coaching situations, we look at an athlete’s perceived inability to finish a workout in the expected time as a matter of not being ‘in shape’. (A discussion of what ‘in shape’ actually refers to in the parameters of anaerobic training is a topic for another time, but one that fundamentally affects the way athletes are coached.) The solution, for many coaches, is to add more reps, slow the athlete down, give more rest, etc. This is done with the underlying belief that more ‘conditioning’ will allow the athlete to ‘hit their times’ or ‘finish strong’. And I will admit that after being conditioned by this belief for years, I will often find myself reverting to this mindset when I see my athletes breaking down in their workouts. I must, however, override this impulse the same way an athlete in a close race must override the belief that straining harder will get them to the finish line faster. 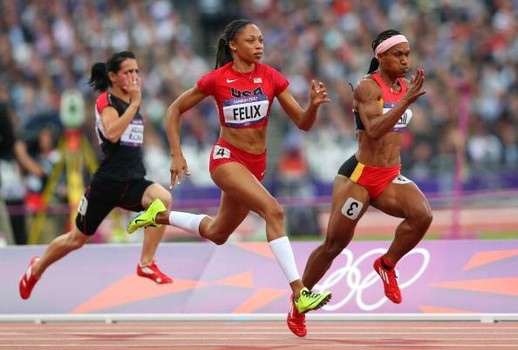 What this means is that, in large part, the reason that athletes are not hitting their times or that they are falling apart at the end of a game or race is not that lack aerobic or anaerobic capacity or need to do more over distance training. In fact, the answer is often that the athlete simply has not developed the pure speed required to take maximum advantage of the energy system requirements of that particular sport, race, interval, etc.

RELATED: The Key to Success in the Long Sprints: Speed Reserve

A classic example of the importance of developing a speed reserve is seen at the elite levels in the 400m dash. The vast majority of world-class 400 meter runners are former 100 and 200 meter runners who moved up. When is the last time you saw a National Championship or major track meet where the finalists comprised a majority of former 800 and 1500 meter runners who moved down? Chances are the answer is never. I use the 400 because it is a classic example of an event that requires both anaerobic and aerobic qualities. How much of each is a subject of debate. I have seen as great as an 80/20 anaerobic to aerobic split over 400 meters, while Clyde Hart claims that the split is more along the lines of 60/40 anaerobic to aerobic. I bring this up to point out that the training applications here, from an energy system standpoint, apply to many sports beyond just track and field.

We must look foundationally at the training concepts that are presented and draw parallels to the specific sport/s that we are involved in as opposed to dogmatically announcing that particular information does not apply because ‘I’m not a (insert sport here) coach.’

Let’s look at a practical example, using the 400, that explains why a focus on developing more speed is usually the answer to an athletes perceived inability to achieve expectation as opposed to reducing the speed and intensity of their training for more so-called ‘conditioning’ and over distance. This, of course, is not a new example, but one that is quite effective at proving the point.

We have ‘Athlete A’ and ‘Athlete B’, both of whom are going to be competing against each other in a 400 meter sprint. All other things being equal:

Both athletes know that they will likely need to run a 49.0 to have a good chance at winning the race. Therefore, their individual race strategies must comprise this fact. They will use the race distribution suggestion from the USATF Level II Sprints manual, which says for male athletes:

Using this chart (and splitting the difference) each athlete’s race strategy should be as follows.

As a side note, I have found that with high school kids (and with younger athletes there will be an even greater difference) this may not be an incredibly realistic distribution. I find that the difference between first 200 and second 200 is usually between 3-4 seconds.

If you’re athlete B and you run a smart race, you’re going to lose by a full second as long as your 200m PR is .5 seconds slower than your competitor. That only leaves him with one choice if he wants to win. He has to go out at his competitor’s pace and hang on down the stretch. But here’s the problem, if both athletes go through the first 200m at 23.25, Athlete A is running at 94.6% of his 200m PR pace, while Athlete B is running at 96.8%. Through the first half of the race, Athlete A has reserved a differential of over 2%. He’s simply not working as hard as his competitor. Who do you think is feeling fresher at this point?

Over the back half of the race, Athlete A needs to run at 89.8% of his PR to achieve the goal time he believes will win the race. Athlete B, already running 2.3% harder than his opponent, must run at 91.8% of his 200m PR just to stay even. What can we expect for an outcome to this race? Do you think Athlete B, working over 2% harder to just to keep even, will out kick Athlete A? Not likely. Even if you argue that Athlete B has more aerobic power than Athlete B, that’s a lot to make up for. You may be saying, ‘But what’s 2% over an entire race?’ All things being equal, the best Athlete B can hope for going into the race is a 48.75. But if he tries to go fast, tries to stay with the athlete who is flat out faster and loses 2% off his goal time, he crawls in at 49.73. The point in all of this, when you look at the numbers, is that Athlete A turns a .5 second advantage in speed reserve (over 200m) into a near 2 second victory (over 400m).

The athlete with more speed is going to win a foot race, regardless of event or sport. This even applies under a state of fatigue and even when considering lactic threshold (which will occur at around 40 seconds in a sub-elite athlete). In track terms, if you want to run a good 800 you have to be able to run a good 400. To run a good 400, you have to run a fast 200. To be a great 200m runner, you need to have 100m speed, etc., etc. But this idea applies just as specifically to sports other than track and field. A prime example is a sport like soccer. At the age group levels, I see the great majority of training for this sport being done using Long Slow Distance (LSD) and long slow intervals. Then parents and coaches wonder why their athletes have no acceleration or top end speed or run heel to toe. Yet, in competition, the sport is characterized by short bursts of speed followed by a jog or moderate paced run, followed by a burst of full intensity sprinting.

RELATED: The Most Important Word In Speed Training

I’m not going to cover training for soccer and similar sports. I just want you to consider how you train athletes in your particular sport and whether your focus is on developing speed and thus a speed reserve versus over ‘conditioning’ your athletes so that they are really good at running slow for extended periods of time. Even in soccer, let’s use a quick example similar to the previous one.

Athlete A and Athlete B are both chasing a loose ball that is 25 yards downfield. Athlete A specifically develops her acceleration and does speed endurance work specific to the demands of her sport. Thus she can cover that distance in 4 seconds (as a round number) under a state of fatigue. Athlete B’s training is based on running mileage and doing long repeats around the soccer field. She may have faster mark in the timed mile than Athlete A, but she’s weak, mechanically inefficient and slow. Do you think she can compete with Athlete A’s 4.0?

So which athlete gets control of the ball in that situation? What if there was a breakaway, who would you want on your team, offensively or defensively? How do you develop speed reserve in your athletes? It starts with knowing and understanding the energy system demands of your sport. From there, you have to implement a short to long speed development program (see my article from the previous issue) that spends the bulk of time, effort and instruction on acceleration development. The important thing is not to be in a rush.

Speed development is a skill that takes time, particularly at the beginning. Don’t be in a rush and progress athletes who have not developed their skills, even if that means it is another coach or program who sees the full maturation of that athlete or group of athletes. But when you develop athletes that are faster than the competition over each progressive distance and use program design techniques that are specific to their sport, they can rely on their speed reserve once fatigue kicks in. It is that reserve of anaerobic speed, not aerobic conditioning, that is going to make the difference on the track, competition or practice field.